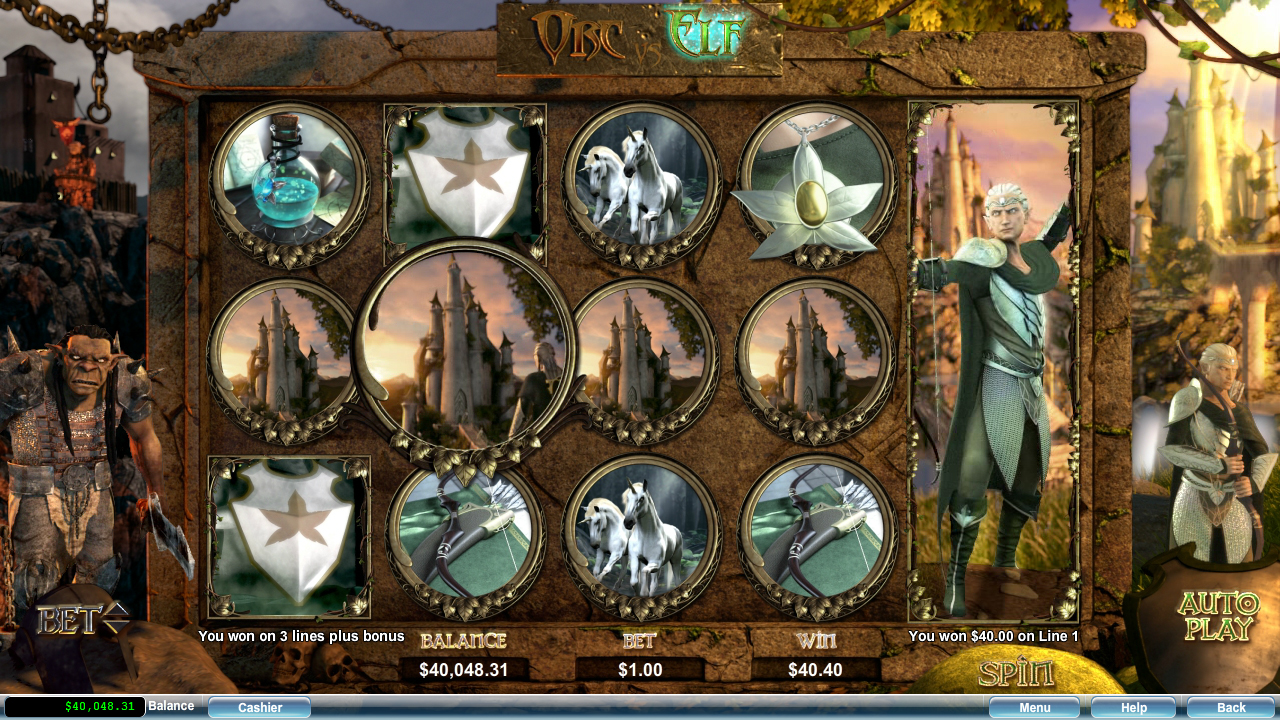 This is a 5-reel 25-payline pokie by RTG featuring cutting-edge 3D graphics that animates a captivating plot. The game accepts bets up to $5 per line and pays line wins up to x1000. There are 2 expanding Wilds, each playing 7 specific features including free spins, multipliers, extra Wilds, Scatters and instant cash prizes. There is also a mind-blowing Battle Bonus. You may play the game either as an Elf or Orc and swap characters thus bringing much diversity into the gameplay. Find the rules and tips below.

This slot is a gift for gamblers in love with The Brotherhood of Ring and other similar stories. It goes even deeper into the past of Middle Earth and looks like a prequel to The Hobbit for there are no humans yet. To start the game, you select a character, an Orc or Elf, to complete a journey full of dangers, battles and adventures. Your choice defines a plethora of features you may win: each character triggers 7 distinctive features. Finally, when you trigger a mind-blowing Battle Bonus, your choice defines who you fight against, an Elf or Orc; when it is over, you may change your character and step into the shoes of your former enemy.

The game is always played on 25 lines thus the only adjustment you make is a bet. It ranges from $0.25 to $5 per line. Prizes and features are earned by symbols. There are ten theme-specific non-feature icons, two expanding Wilds and two Scatters. Non-feature icons pay from left to right; six of them do so when you land 3, 4 or 5 icons of a kind on any line and the other pics award when you land 2, 3, 4 or 5 matching icons on any line. The line prizes start at x2 and reach x1000 a line bet.

An Orc Wild appears on reel 1, expands to cover an entire reel and substitutes for any icon except for Elf Shield Scatter.

An Elf Wild appears on reel 5, also expands and substitutes for any icon except for an Orc Scatter. Each expanding Wild counts as one Scatter when it replaces a respective Scatter. Orc and Elf Scatters look different yet do the same trick: 4 or 5 Scatters on the reels award a prize of x5 or x20 a total bet. Besides, 3 or more Scatters trigger features.

An Orc is sneaking to an Orcholme fortress and an Elf is traveling to Elveros citadel. Different destinations mean different ways and adventures, unless two travelers meet in a combat which becomes their common trial and an ultimate battle. But before they meet, each character follows his way and encounters his features.

You may play a feature or save it for later. If you save a feature, you may call it any moment and play, unless another feature activates. In the latter case the saved feature is dismissed and your feature trail restores.

All these features pay their awards based on an average bet calculated in the course of a normal game between features. To let the pokie show its full winning capacity, it is recommended to place the highest bet possible in a base game. Then your average bet will have the highest possible value.

The Elf and Orc are destined to fight in a battle when they meet. This battle is triggered by 3 Bonus Battle icons appearing on reels 2, 3 and 4. When the Elf wins a battle, a Woodlands Spins feature activates. The Orc winner gets a Goblin Gold feature. If a battle is lost, you get a consolation cash prize ranging from x2 to x10 an average bet.

Victories and failures in Battle Bonus rounds are counted as Victory Points and are rewarded later, during an Ultimate Victory feature.

All in all, the game is amazing in terms of a plot, imagery, ambience and interactivity. The 3D animation is breathtaking. It is surely an excellent choice for having fun. Besides, the paytable and features give it a value added which is especially tangible when you play for real money. Having spotted the game in an online casino, give it a good deal of spinning, it is certainly a worth option. The pokie is compatible with a PC or mobile device.

This is a 5-reel 25-payline pokie that brings an Aussie right to Middle Earth and accepts bets up to $5 per line. There are two characters, each playing seven distinctive features including free spins, extra Wilds, Scatters and instant cash prizes. This is a cutting-edge pokie in terms of 3D animation and storyline.