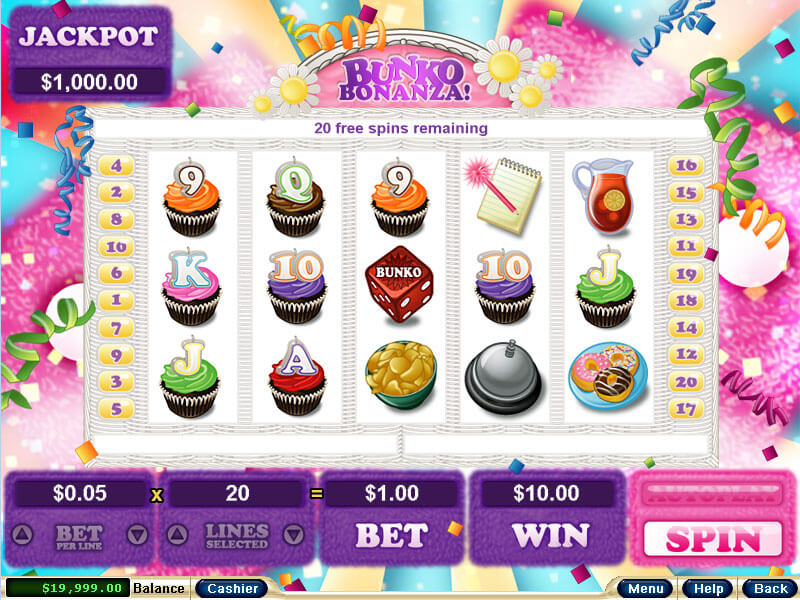 Bunko Bonanza is a 5-reel 20-payline video pokie with a random progressive jackpot. It is loosely based on a parlor dice game, known as Bunko or Bunco. Bet sizes are designed to be affordable for low-budget gamers while being still attractive for big bettors. Features built into the pokie include a wild, a scatter and free spins (21 spins in one bonus session). Besides, a player can retrigger free spins in a very creative way, and the number of extra spins will depend on the dice throw outcome. Bunko Bonanza is available on mobile devices and desktops.

There are some pokies that mix the standard pokie gameplay with other online casino games such as roulette, poker or blackjack. This game from RTG contains lots of elements adopted from a bunko, a dice rolling group game in which players divide into teams and score points by rolling three dice. The round stops when a team has collected 21 points – by the way, this number is used in Bunko Bonanza. In the pokie, there are also dice symbols, a notebook and some other attributes that speak volumes to fans of that dice game.

Anyway, what you see on the pokie screen is a big living-room with blue striped wallpaper, sofa and table lamp – a typical place for playing bunko. The white and grey reels have 20 adjustable paylines and some yummy symbols on them. RTG have applied here the most typical 5×3 layout with a left-to-right win format, meaning that a certain number of matching pics need to be located in a payline pattern to pay out an award. The game was released over 10 years ago but its graphics does not seem to be outdated (or just a little bit) – it is elegant, eye-catching and neat.

Looking at the symbols, one can think of a bunko game session played at home. There are six colored cupcakes with candles on them shaped as 9, 10 and other high cards. Payouts for them vary between x5 and x150 for five of a kind. Other symbols include a notebook with pink pencil (x250), a bowl of potato chips (x250), a jar with juice (x1000) and cookies on a plate (x1000). Another distinction of high-valued pics from low-valued ones is that the former are able to create two-of-a-kind combinations.

As is mentioned above, the number of active lines can be configured manually from the default amount of 20 and some thrifty gamblers do so. However, it makes sense to reduce a line bet rather than dismiss an active line from play. Actually, there are several bet values ranging from one cent to five dollars. If you play full lines, you total bet can be anywhere between $0.20 and $100 per spin.

Playing for real money in a casino online, you stand the chance to win the maximum of $5000 for one single combination in Bunko Bonanza. During free spins, there are some heftier wins so you should try to unlock that feature if you are lucky.

A silver-toned bell, which is used to signal the beginning and end of a bunko round, is a wild symbol. It has just a basic functionality with a single added feature. When it lands in a proper position, it can substitute for a missing pic and create a combination. When part of a combination, the wild doubles a normal payoff for that combination.

A red die, which is included in the bunko game kit, is a scatter. Three of them award your bet times x10 (up to $1000 at max) and trigger 21 free spins (to recap, 21 is an ultimate score that wins a bunko round). A wild symbol does the same as in base game, doubling payouts when substituting.

Before the feature gets underway, a die roll determines a multiplier that will accompany your bonus session until it ends. Bonus multipliers are x2 to x6. Imagine getting a multiplier of x6 and 21 free spins. The potential prizes can be really fantastic!

The feature is retriggerable under the initial conditions – you should land three scatters in any position. When this occurs, a die rolls again. If it shows the initial number you have rolled at the beginning of the main free spins, you get 21 extra free spins. If the dice shows any other number, you receive 5 extra free spins.

The pokie features a random progressive jackpot winnable when wagering real money. The ever-growing jackpot amount is fuelled by a portion of bets placed on Bunko Bonanza and the jackpot amounts are unique for each online casino because the pools accrue locally. The only requirement to qualify for winning is to play 20 paylines irrespective of a coin denomination. The jackpot sum displayed on the meter does not fluctuate as you modify a bet size – you can play whether at $100 or $1 and still see the same figures on the jackpot meter. How much you bet is relevant to the winning probabilities: the higher your bet, the higher chances.

Bunko Bonanza is a progressive video pokie with 5 reels and 20 paylines. It has a wild symbol, scatter and retriggerable free spins (5 or 21 spins are added on retrigger). Bet sizes of $0.20 to $100 are convenient for everyone. RTG adapted the game to iOS/Android mobile devices.