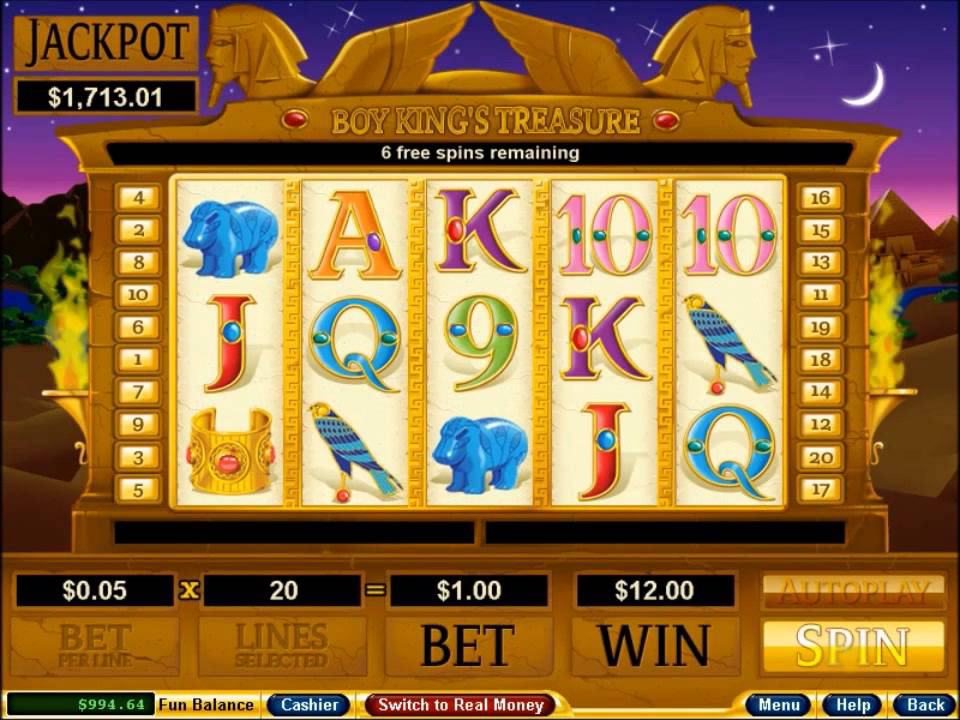 This is a 5-reel pokie with 20 paylines and a random progressive jackpot. As the title suggests, the game is inspired by Tutankhamun, an Egyptian pharaoh, and the pokie visuals are fully devoted to this enigmatic theme. There are three bonus features in the pokie including a wild symbol with a multiplier of x2, free spins and a cumulative multiplier of up to x16. The highest prize in the game is x1800 (or x3600 with a wild substitute), and the highest acceptable bet is $100 per spin. Elegant, fast and full of treasures, the slot takes you back to ancient Egypt where you can win tons of cash prizes, provided you play for real money.

Tutankhamun, also known as King Tut, was a teenager when he ascended to the throne. His reign was short because he tragically passed away at the age of 19, that is why he is often referred to as the Boy King. The RTG’ pokie is a bit unusual compared to other games on the Egyptian theme. Its symbols are kind of childish; some of them are similar to toys, the others – like a pharaoh’s mask – look like animated cartoon characters. Above the reels are two sphinxes sitting and looking in the opposite directions. The picture behind the reels shows a typical local landscape with pyramids, Nile, sands and sparse vegetation along the river, making the pokie as realistic as possible.

Realtime Gaming keeps to the traditional 5×3 model in Boy King’s Treasure. In this setup, there are 15 symbols visible simultaneously and winning combos must be on preset lines in order to award you a paytable win. The number of lines is subject to modification, if needed. You can reduce the 20 default lines and wager on less, though doing so is unreasonable because you thus shrinks your winning chances.

Incorporating the letters and numbers, which stand for playing card face values, is still a good practice in pokie making. Keeping with this tradition, RTG included 9 to A pics into the set, making them low-valued symbols that award 5 to 500 coins for five of a kind. Other regular symbols portray various things associated with the Egyptian culture such as a blue bird, symbolic representation of a deity (x750 for five), a blue four-legged animal (x750), a lion’s mask (x1000) and a golden wrist band bracelet (x1800).

The figures specified in brackets show coin payouts for five identical symbols. To know how much you can potentially win in real-money terms, you should get an idea of bet sizes. At the bottom left corner there is a Bet Per Line selector with arrow buttons. Clicking either button increases or decreases this value between $0.01 and $5. Therefore, you can place $0.20 to $100 per spin – you can absolutely place as low as one cent and activate a single line but think twice before doing this. The best tip is to play full lines and bet at least 20 cents to maximize your winning odds.

Now that bet sizes are explained, you can calculate top three prizes that come from regular symbols; these are $9000, $5000 and $3750. Read below to find more about feature symbols and their payouts.

The Boy King’s golden mask discovered in Tut’s tomb in the 20th century is a wild symbol. In base game, it behaves like any other wild symbol, substituting for all regular symbols and helping them form combos. It can appear everywhere but cannot create combos by itself.

Colored cobras are scatter symbols. They have a few advantages over other symbols. First, they count in any position, and second, 3 of them trigger a bonus feature. The paytable reads that 3, 4 or 5 Cobras scattered across the game field award 15, 25 or 100 times the total bet. If you wager $100 (max bet) and hit five scatters, you will grab $10,000, which is the highest prize in this online game.

You are awarded exactly 15 free games regardless of the number of triggering scatters. During free games the Tut wild symbol, which is a mere substitute in base game, becomes more profitable because it bears a random multiplier of x2, x3 or x4, applied to all wins generated with the wild involved. If two wilds take part in a combination at a time, their multiplier values are multiplied, not added. Therefore, there is a probability of getting a x16 multiplier on a single spin (two wilds, both featuring a multiplier of x4).

How to win a random jackpot?

The pokie has a local progressive jackpot with varying values across online casinos. It grows bigger with every real-money bet placed by you and other players of the casino you are in. The jackpot has a random winning pattern, meaning it can be released at any time without any preconditions, on-reel events and such. All you have to do to qualify is to activate all lines by wagering at least $0.20 per spin.

Boy King’s Treasure is a 5-reel 20-payline progressive pokies dedicated to Tutankhamun, Egyptian ruler. It has a wild symbol that carries a cumulative multiplier of x2, x3 and x4 during free spins. Bet sizes are $0.20 to $100 per spin, and the maximum potential prize in base game is $10,000 for hitting five scatters. Mobile users are welcome to try this game, too.