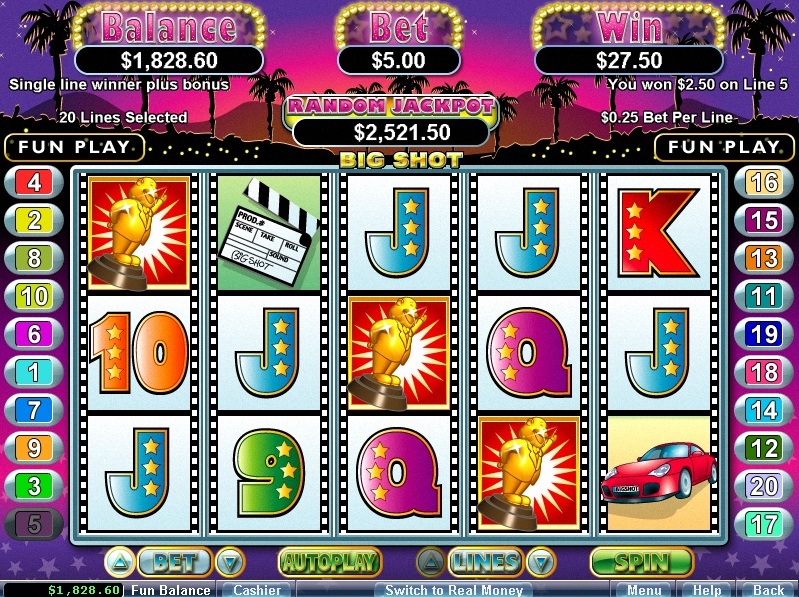 This is a celebrity-themed pokie with 5 reels, 20 paylines and a random progressive jackpot. You will see the glamorous life of a famous celebrity guy who enjoys all the pleasures of being a VIP: beautiful girls, Oscar awards and adoration of millions of people. Big Shot is a fairly simple slot with just a couple of features including a wild symbol, a scatter, free spins with spiraling up multipliers and an extra Big Shot substitute. The game is designed for all budgets and is made compatible with mobile devices.

Big Shot was released in 2011 and it has a common reel design with 5 columns and 3 rows. Winning combos are completed in a traditional manner, from left to right on active paylines. Reels are designed as film tracks and symbol positions look like frames. Behind the reels, you can see a generic palm tree landscape, mountains and sunset. Given the release year, the pokie is quite nice in terms of design, though players who like sophisticated three-dimensional solutions will be a bit disappointed. Playing for real money, you are in with a chance of hitting a random jackpot, provided you play at full coins (the minimum of $0.20 per spin).

There are common 9 to A pics related to playing card face values. They are of different colors and feature small golden stars on them. The prizes awarded by these ordinary pics range between x5 and x400. Other combos are more profitable: five film reels or clapperboards award 500 coins. A red Ferrari will bring you x1000 and a beautiful actress in pink dress will pay you x2500. These are non-feature pictures and they abide by payline rules, that is, they must appear exactly on a payline, beginning from the leftmost reel.

An online casino player can place a bet starting at $0.20 per spin. By changing related values on the user interface under the reels, the player can adjust a bet to their preferences and make is as high as $100 per spin ($5 per line). With this in view, it is easy to calculate the maximum line wins; these are $12,500, $5000 and $2500.

There are few pokies that can dispense with substitution symbols. In this regard, Big Shot has double fun because it has two wild symbols. In fact, the first wild, Superstar, is active every time in base game and during free spins. While the second wild, a Big Shot logo, joins the action in free spins only and it lands on the first and fifth reels only.

Neither wild completes combinations on their own. However, they are extremely useful in all game modes because they fill in the gaps in paylines and thus contribute to winning combos.

A golden award statuette, a parody on the world-famous Oscar trophy, is a scatter symbol. It creates combinations as any other symbol but does it differently. If two of them (or greater) appear in any position, you get a win of x1 to x100. Scatter wins are based on a total spin bet, thus you are expected to pocket $10,000 for five scatters if playing at max.

A brightly lit Big Shot logo is a feature symbol and it is linked to reels 1 and 5 only. Once both appear on these reels, you are awarded 5, 7, 10, 15 or 20 free spins, which cannot be retriggered during the feature. There is a unique bonus addition to the feature, which can make you a very rich guy in one lucky spin. Free spins have an ever-growing multiplier. It starts at x1 on the first spin and increases by 1 with each subsequent spin. For example, being awarded 20 free spins, you will have a win multiplier of x20 on the last, twentieth spin. If no high-valued combos occur, you will certainly win big even on playing card combos (e.g., five A’s).

A Big Shot logo, which acts as a free spin trigger in base game, also takes part in the feature. But this time, it acts as an extra wild that complements the regular wild, Superstar.

Players who visit an online casino on a mobile or desktop can try to win a random progressive jackpot available in Big Shot. Being random in this case implies the jackpot can be awarded at any time and it needs no special combination or any bonus game to get activated. The jackpot meter is on display above the reels. Its value is unique for each online casino where it is represented and it grows by taking 1.5% of a real-money bet into the pool.

There are no special tips on how to enhance the jackpot winning opportunities but there is an important rule that you should not ignore. Make sure you activate all paylines because this is the only qualifying requirement for a jackpot win. Besides, your bet size also has effect on winning probabilities.

Big Shot is a 5-reel 20-payline video pokie with a random progressive jackpot. Having bet sizes of $0.20 to $100, the game is affordable for everyone who wants to wager real money. You enjoy a wild symbol and free spins with a towering multiplier that can reach an astounding x20 by the end of the feature. Besides, you have an extra wild symbol during free spins.