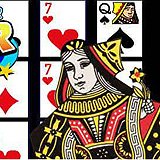 Deuces and Joker is one of the most popular video poker games offered by a casino. And it does not depend on whether you are going to play at brick and mortar casino or prefer to stay at home and play in the Internet. In any case you will get the opportunity not only to take pleasure in the game, but also to get the profit. You are even more likely to be winning if you will follow the Deuces and Joker strategy.

To hold the luck in your hands while playing Deuces and Joker, you should bear in mind peculiarities of the game. Before taking any actions it is recommended to examine the payout table. It is not a secret that the bigger your bet is, the bigger your expected return becomes. Thus playing in the option “Bet Max” your expected return will be 99.26%.

Playing Deuces and Joker you should not hunt for high cards discarding everything lower than a Jack. The lowest paying hand here is three of a kind and the value of the cards does not play any role. Thus you have to build at least three of a kind combination to get an even payout.

The Deuces and Joker strategy is built of definite list of advices which you should follow to win in the game. As soon as this game is played with 5 wild cards (they are four deuces and a joker), your strategy should take this into consideration. In this respect we have divided all the rules according to the presence or absence of wild cards in your initial hand.

If you have no wild cards in your initial hand, you should discard all the cards except:

If your initial hand contains one wild card, you have to keep the following cards (note, that the rest you ought to discard without a doubt):

If two wild cards were dealt, you should hold the following cards and throw all the rest absent in the list:

If your initial hand contains three wild cards, you have to keep only:

If you were so lucky to have four wild cards, you should keep the wild cards and discard the last one in the hope to get the fifth wild card.