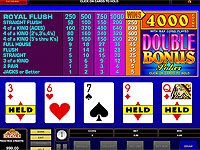 You will be playing 100 hands in this game and the payouts for four of a kind combinations are double that of Double Bonus Poker.  The payout begins with Jacks or Better.  Winning combinations are pairs of Jacks, Queens, Kings and Aces, two pair, three of a kind, straight, flush, full house, four 5’s through Kings, four 2’s, 3’s and 4’s, four Aces, straight flush, and a Royal Flush with the highest payout.

5 faced up cards are dealt to you, on a one hundred hand grind used in this version of Double Double Bonus Poker.  Only the last hand displays the starting cards.  You can hold or discard as many cards as you want to make the highest paying combination. For each hand you will use a separate 52 card deck.  Click on the Draw button to be dealt the remaining cards to each hand from their separate decks.  Hands with no winning combinations disappear.