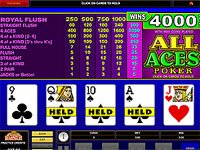 All Aces is quite new modification of video poker. All Aces was developed by one of the leading gambling software producers Microgaming. According to the title of the game it revolves around aces.

If you were lucky and hit four aces your winning will be increased dramatically in comparison with other variations of video poker. But still Royal Flush brings the biggest win. Payout rate is quite high in All Aces. Therefore this game is relatively popular among gamblers.

Another specific of All Aces is that Four of a Kind in 2’s, 3’s or 4’s will bring you bigger payout than Four of a Kind in bigger cards (but not aces for sure). As you can see, the game is different from the other kinds of video poker. Thus it is not surprising that All Aces is presented in many casinos. This game doesn’t use any wild cards of joker. Standard 52-cards deck is utilized.

The game is quite simple. Firstly you place your bet. As usual it can be from 1 to 5 coins. The bigger is your bet the more you can win. Then you should press “Draw” button. You will be given 5 cards. You can discard your cards or just some of them. It is possible to change cards only once. You receive new cards and complete your hand. If you managed to win any money you will be asked to collect winning or double it. You can try to increase your winning. Then you will face a standard double game with 5 cards. First card will be opened. This is the dealer’s card. You need to open another one. You will lose your winning if your card is smaller than the dealer’s card. In oppose, your bigger card than the dealer’s card will bring you doubled winning. In case of tie you will just keep your initial win. This is the simple system which is used in such situations in most video poker games.

Payout Table for All Aces: