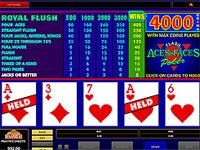 The winning hands will be paid out according to the number of coins bet. The total amount won will depend on the amount of coins bet and the value of each coin.