Video poker is a fun and exciting version of poker that can be played both in a live casino at a slot machine or in an online casino at a virtual online slot machine. Basic video poker rules are similar to live poker in that the ranking of hands can be the same as regular live poker, but because of the addition of video, extras can be added to the game to make it even more fun for the player.

We will cover basic video poker rules for you here so you may become familiar with them and we will also cover some basic strategies. This is a fun and exciting game that appeals to slot players, poker players, and everyone in between.

Card values rank from high to low as follows:

Ace appears twice because it can count as either low or high card.

In video poker hands, typically the player is dealt five cards and is then given the opportunity to hold one or more of the initially dealt cards. The player clicks on the cards to keep, and then clicks on a button to deal again, or continue, and the cards not held are discarded and new cards are dealt to replace them. The player then is paid on the best hand possible from the remaining five cards in their hand if they have any winning combination in those cards (winnings will be determined by both the house payout and the players initial wager). 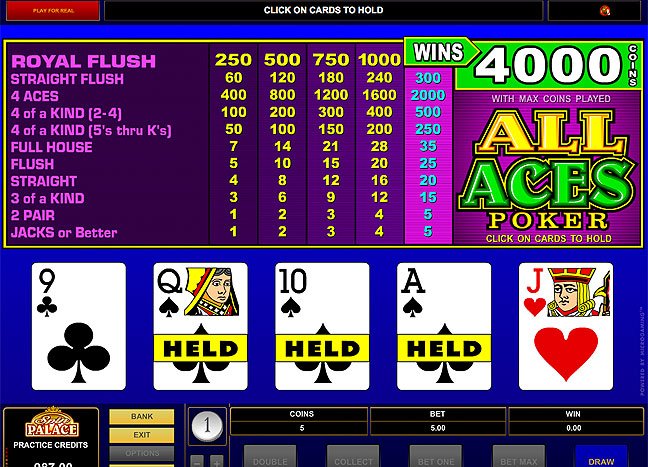 The basic hand rankings in a non-specialty video poker game usually rank as follows, starting with the lowest:

There are some variations on video poker that are very popular. For example, a player may frequently find video poker games that offer multiple hands played at one time. In games of this nature, there may be up to five hands dealt at once, with only one hand dealt up so the player can see the cards. The player chooses which cards to hold, and those cards are held for all five hands. The rest of the cards are discarded and the player receives the last of their cards for all five hands, all face up. The player then receives a payout for any combination in any of the five hands. This variation is exciting because there is an opportunity to win multiple times.

A player could potentially win five different winning combinations in any one round.

Another popular variation on video poker rules is when one card is considered a wild card, very frequently the two, or deuce. These games are called Deuces Wild. In Deuces Wild video poker rules, there are some basic strategies for which cards to hold and which to discard that will assist a player in scoring the best hand possible:

If a player receives four deuces on the first deal, they should hold all five cards no matter what the fifth card is because the hand cannot be improved upon. In a Deuces Wild game, the Royal Flush is not the best hand, the Five of a Kind becomes the best hand, so anything matches with four deuces automatically wins the best hand.

If three deuces are dealt initially, the player should keep all the cards only if they result in a wild Royal Flush or wild Five of a Kind since these are the top two payouts. Otherwise, only the three deuces should be held for the best opportunity at the highest payout.

If two deuces are dealt on the first hand, any hand that is Four of a Kind or better should be held, and so should any four cards that would make up a Royal Flush. Otherwise, hold only the deuces to increase the chances of improving on the hand.

If only one deuce is dealt on the player’s first hand, any paying hands can be held, but look for the best possible combination to increase your payout opportunity.