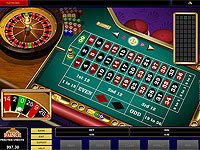 En Prison rule applied in some casinos brings down the house edge coming into action when the ball lands on zero. In this case all even-odd bets are not lost, but placed in prison. The player can get half his bet back immediately or leave it for the next spin of the wheel, with the wager being on the same betting spot. If the en prison wager comes in on the next spin, it is returned to the player.

American roulette is a U.S.-originated roulette version that quickly became popular spreading to other countries all over the world.