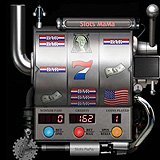 Online pokie players wonder if there is any strategy enabling them to pick a correct item during a pick-to-win bonus feature, or the outcomes are already pre-determined.

This deceivingly simple question cannot be answered easily. Let’s get the facts straight. Players want to know if the outcomes of a bonus round and a bonus payout are pre-determined by pokie software, whatever symbols or locations they pick off. Once a player has picked an item, the pokie then uncovers what is hiding underneath other locations.

Players who repeatedly pick the lowest cash values come to understanding that all actual bonus winnings are pre-determined, and all larger unpicked amounts revealed at the end of a bonus feature are randomly generated on the screen. Thus, your bonus awards will be low, whatever your choice is; and all bonus game strategies turn out to be useless, since you get the cash award pre-programmed by pokie suppliers, plain and simple. The big amounts revealed in bonus features are designed to whip up a gambling enthusiasm, and all big wins in regular rounds serve the same purpose.

We’ll try to argue the aforesaid opinion. Modern online pokies are software-based games that use a random number generator to produce random sequences of icons the combinations are built of. So all combinations and related winning amounts are generated during the gameplay. When you pick an item in any bonus feature, the machine immediately generates its winning value. Therefore, a payout does depend upon a player’s choice, but all strategies, tricks and whatever experts come up with make no sense. A bonus feature is controlled by a random number generator that can create millions of random patterns.

To conclude, bonus features are completely unpredictable and incalculable. So rely on your sixth sense during bonus rounds.