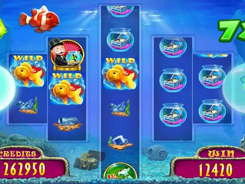 Gold Fish is a feature-packed 5-reel pokie themed around aquarium fish. Its key highlight is 6 different bonus rounds, five of which are triggered randomly. The pokie has 25 fixed paylines and an obligatory side bet that is deducted automatically from your balance. If you are lucky enough to hit five goldfish on a payline, the award can run up to $30,000. A very lively and nice game from the WMS developer. The reels of the pokie are placed against a big aquarium. Colorful exotic fish slowly move across the screen as if in a real tank. Watching them gives you gentle relaxation while you play this enticing pokie.

Symbols on the reels comprise five fish species, aquarium accessories and some other associated pictures. The minimum and maximum bets are $0.30 and $75 per spin plus a forced side bet that increases the basic bet by x10 times the line amount. With this in view, the total bet reaches $105. Low-paying icons are a plant ($300 for five of a kind), a hand net ($300), exotic plants ($300), a bright mollusk ($375) and a turtle ($450). Fish are high-paying symbols with the maximum cash prize of $3000 for five clownfish. Any regular combination must consists of 3 or more like symbols aligned on a payline from left to right.

A goldfish is a wild substitute that helps regular symbols complete wins. Furthermore, the goldfish creates combinations by itself when two or more occur on a payline. The highest jackpot prize of $30,000 is granted for five wilds popped up on the screen.

A fish food symbol is a scatter that awards up to $7500 when three, four or five land in any position in view. Besides, a bonus feature is triggered when 3+ scatters land. You will see a grid of fish food containers and your aim here is to match three items by picking fish food in any order. There are five different kinds of food that the container of your choice can reveal and your bonus earnings depend on which type you have matched:

Some containers reveal turtle food. Finding 3 of them on the grid allows you to win an additional bonus amount of x2 to x50, which is paid out complementary to fish food bonus prizes.

After any spin in the base game, a fish feature can be triggered at random. When the feature begins, a fishbowl moves across the gaming screen and any one of five fish leaps into the fishbowl. Each of the five fish triggers a unique bonus described in detail below.

This feature is triggered when a blue fish leaps into the aquarium. Superscatters are a special bonus mode where every regular symbol is treated as if it were a scatter, i.e. in any position. You are awarded 1, 2 or 3 free spins. When the reels come to a stop, all the 15 symbols on the reels are evaluated as if they were scatters. If, for example, you get five wilds in any position, not on a payline, you will earn $30,000.

This feature is awarded after a green fish jumps into the aquarium. On a new screen, you are shown a few bubbles that you must pick one by one. Every bubble reveals a random monetary award and one bubble hides “Award All”. If you found it, all the cash prizes are paid to you instantly. A prize for one single pick us x10 to x500 the line bet (up to $1500).

If a red fish decides to jump into the fishbowl, the same-name feature is awarded. You are prompted to select a clam, castle or chest to see your award. The initial pick prize varies between x10 and x50 but you can end the feature with more cash when any of the for fish touches it. A blue fish increases in value your award by x20 – x100. A gold fish doubles your bonus prize, and etc. Each fish can kiss the item you have chosen up to 10 times, so the ultimate proceeds from the bonus can be truly impressive.

The purple fish blows out three bubbles, with digits from zero to nine in each. The bubbles then arrange in order and produce a number between 015 and 984, which corresponds to your cash award multiplied by the line bet in the triggering base game. The max winning potential of the bonus is $2952.

The Gold Fish leaping into the aquarium awards you a random number of 5 to 20 free spins at a multiplier of x2 to x10. To determine how many free spins you have won, you should pick a bubble that will reveal the number of free spins. Every spin will be beneficial for you because for any non-winning round you receive a consolation prize of x2 the line bet.

Gold Fish from Williams Interactive (WMS) is a fascinating video slot with 5 reels and 25 paylines. You will enjoy five random bonus features and a Fish Food bonus game, all with decent cash prizes. Wilds and scatters are also available in the game.