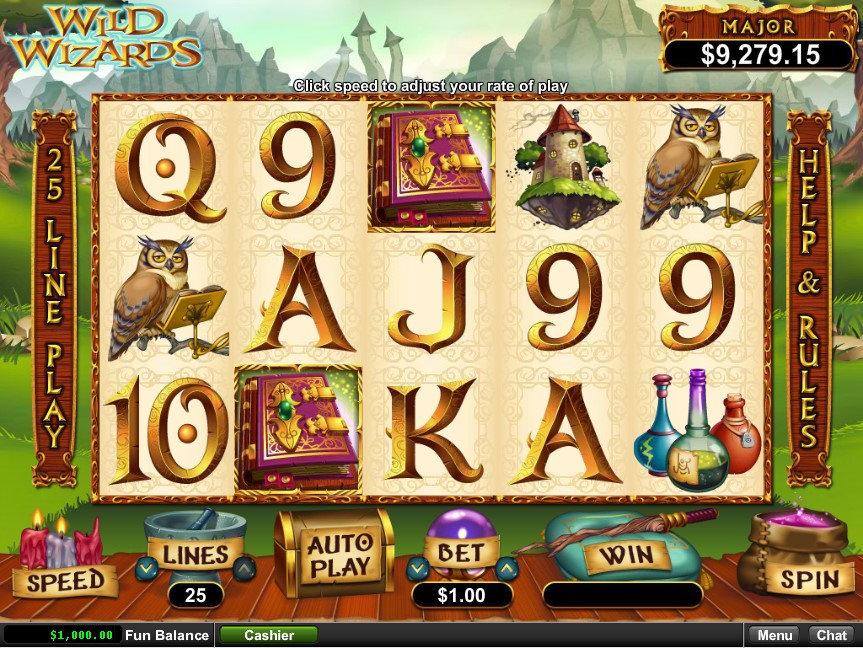 This 5-reel 25-payline pokie by RTG accepts bets up to $0.10 per line and awards line wins up to x750 a line bet and Scatter prizes up to x50 a total bet. Expanding Wilds sub for all icons including Scatters. There are 5 bonus features with retriggerable free spins, enhanced Wilds and reversed paytable that awards up to x500 a line bet for only 2 icons of a kind. There is also a 2-tier progressive jackpot waiting for the wise and devoted! Read the rules and tips, take your spellbook and dive into the world of wizardry.

The game is conveniently equipped with a speed control which makes 3D animation run at a slower or faster pace. There is also a flexible and versatile autospin feature which is indispensable when you play the game in an online casino. The game is also marked with state-of-the-art 3D animation and proper ambience making the gameplay as enjoyable and exciting as the true sorcery is. Wild Wizards is optimized for diverse mobile devices.

The world of magic embodied in the gameplay is very easy to enter. Activate between 1 and 25 paylines, place a bet from $0.01 up to $0.10 per line and it’s done: you are a wizard and all the mighty power of true magic is at your service.

The symbols are ten non-feature icons, a Wild Wizard symbol and a Spell Book Scatter. Non-feature icons pay from left to right only and include six charmed playing cards from 9 through to A, a set of Potions, a Wizard’s Hat, a Wizard’s Tower and an Owl. Cards pay between x5 and x150 a line bet when you land 3, 4 or 5 cards of a kind on any active payline.

Other non-feature icons award prizes between x2 and x750 when there are 2, 3, 4 or 5 matching non-feature icons on any active payline. Pay attention to this detail: to make the magic work you have to land matching icons on active lines only as soon as idle lines pay nothing. It is advisable to have them all activated in order let the pokie show all its winning power!

A Wild Wizard symbol appears on reels 2, 3, 4 and 5 in a normal game and substitutes for any icon including Scatters. It is an expanding Wild: each time it settles on a reel a Wizard emerges, puts his spell on a reel and occupies it entirely, that is, he converts it into a Wild reel. Only thereupon all your possible wins and prizes are assessed, calculated and paid. When an expanded Wild subs for a Scatter it is counted as one Scatter icon.

Second, the combined powers of the Wizard Wild and the Spell Book Scatter trigger bonus features. Land a Spell Book on reel 1 and a Wizard on reel 5 and be awarded one of five exciting features.

The power of magic moves in mysterious ways: each time you land a Scatter on reel 1 and a Wild on reel 5, it grants you one of five features selected at random.

A Mad Magic feature awards you 5 free games during which a reversed paytable applies. This means that each time you land 4, 3 or 2 non-feature icons of a kind they pay x5, x50 or even x500 a line bet! This feature is the only one out of five which you cannot retrigger. To activate it once more you have to land a Scatter on reel 1 and a Wild on reel 5 in the course of a normal game.

A Wizard’s Tower feature awards you 8 retriggerable free games during which a Wizard Wild is held on the central reel for the entire duration of free spins. To retrigger the feature, land a Scatter on reel 1 and a Wild on reel 5.

A Fireball feature awards you 6 free games during which a Wizard Wild is held on reels 2 and 4. As soon as this feature is retriggerable, you may play 6 or 12 free games with as many as 2 Wild reels. Do not forget that Wilds in this game substitute for all symbols including Scatters, so this feature may earn you quite good prizes.

When a Polymorph feature activates, a triggering Wizard Wild casts a spell and reveals 1, 2 or 3 bonus symbols. Then the Wizard grants you 7 free games during which any bonus symbol is replaced with a Wizard Wild before any wins are awarded. Having landed a Scatter on reel 1 and a Wild on reel 5, you retrigger the bonus and run 7 extra free games.

A Sorcery feature awards you 10 free games in which an extra Wizard Wild is added on the screen before each free spin. If you land a Scatter on reel 1 and a Wild on reel 5 during a feature, it awards you 5 extra free games.

Each feature runs at line and bet settings you select for a base game. It is advisable to get ready for the features in advance and activate all paylines in a normal game and also place a line bet as high as you can afford. This simple strategy is the most effective in terms of payout when any feature activates. If you follow the strategy and play for real money you can make a Wizard pay you a very good reward.

The game offers you a 2-tier progressive jackpot that triggers at random. Play the game online, place any bet and then either progressive jackpot, a Major or Minor, may activate after any spin and award you a prize shown on the meter above the reels. This grand prize is paid as an extra to all line wins and Scatter prizes you may manage to score in a triggering round.

This 5-reel 25-payline pokie by Realtime Gaming is wrapped up in wizardry and magic. It accepts line bets up to $0.10 and awards line wins up to x750 and Scatter prizes up to x50 a total bet. Expanding Wilds sub for any icon. There are five bonus features awarding retriggerable free games, extra Wilds and fixed Wilds as well as reversed payouts up to x500 a line bet for 2 matching icons. A 2-tier progressive jackpot completes the wizardry fest.