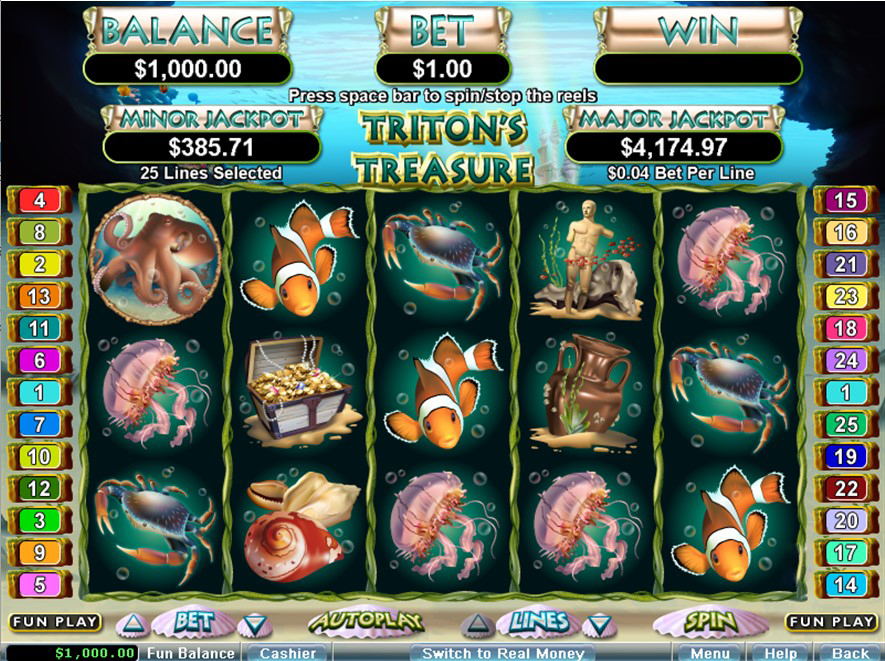 Triton’s Treasure is a 5-reel slot machine with 25 paylines. The game is devoted to Greek mythology and all pokie symbols are filled with the unmistakable air of Ancient Greece and its immortal culture. The reviewed game has just a few bonus features yet all of them are potentially lucrative. These include an expanding wild symbol and scatters that pay up to $12,500. During a Pick a Shell feature you can win the maximum of 30 free spins and a multiplier of x10. The game online has an RTG’s branded progressive jackpot available in two variations, Minor and Major.

Greek mythology themes are not rare in pokies from RTG and other prominent makers. Yet the choice of Triton, the messenger for his father, is an interesting step because he is a little known deity for modern people and is often confused with Poseidon. Anyway, the pokie takes you deep underwater where you will find sunken statues, vases and colorful fishes. Though lacking some sophistication, graphics are very good even by today’s standards because of attention to every detail, for example, user interface buttons are drawn as pink shells.

Minor and Major jackpot indicators are always visible above the reels and their amounts are always growing until a lucky gambler hits either. Winning combos are created by two or more matching symbols appeared on an active line from left to right, beginning with the leftmost reel. The paytable and rules can be viewed by clicking the Help button under the reels when in the game.

Bet options are fairly typical for an RTG pokie. The Bet selectors are used to change a line bet between $0.01 and $5. The Lines arrows are designed to let you change the number of active lines between 1 and 25. There are also Autoplay and Spin buttons. If you want to play at the minimum bet, place $0.25 and enjoy the full functionalities of the pokie, whether on desktop or mobile device. The maximum possible bet is $125 per spin, $5 per line.

Given the maximum line bet, the top three payouts in the pokie are $16,665, $11,110 and $2500. These payouts are generated by non-features symbols listed above. There is also a scatter symbol, to be reviewed below, which has very good payouts as well.

King Triton himself is a wild symbol. it does not create payouts by himself because it appears on the second, third and fourth reels only. Yet he is a very helpful symbol because it substitutes in combinations and thus helps regular icons generate payouts. Another bonus feature related to the wild symbol is that it expands and covers the entire reel at which point all wins are calculated and paid out.

A red-haired mermaid is a scatter symbol. It has two important functions. First, it awards instant payouts when two or more appear in any position. Mermaids are scatter symbols, meaning they can be at absolutely any place and still count towards a combination. Two or more mermaids award x1 to x100 the total bet, which is equivalent to the maximum of $12,500.

The second function that scatters have is their ability to trigger free spins. Whenever 3 or more mermaids find their way to the screen, they unlock a Pick a Shell bonus game. On the second screen, you will see two shells and have to pick either. The number of bonus picks is equal to the number of scatters that have triggered the bonus game. The shell of your choice will reveal 5 free spins or a +2 multiplier. When you have used all the bonus picks, the ultimate number of free spins and the multiplier value are tallied and you proceed to a free game session automatically.

The pokie has two progressive jackpots, Minor (lower) and Major (higher). They seed at $250 and $1000, accordingly. The jackpots have a local model, meaning they mount up in each online casino independently. As in many other RTG’s titles, the grand prizes in Triton’s Treasure are random and this further means they can be won at any time without the player’s having to fulfill any requirements. As for bet sizes, you can play even at the pokie’s lowest acceptable bet of $0.25 and still qualify. Yet the higher your stake, the more chances are to win the jackpot.

Triton’s Treasure is a 5-reel 25-payline pokie with the ocean treasures and mythological theme. You will benefit from expanding wild symbols and scatters that unlock 5 to 30 free spins at multipliers of up to x10. The number of free spins and a multiplier value is determined by a pick-to-win bonus game in which you are to choose sea shells. Triton’s Treasure is equipped with two randomly awarded progressive jackpots.