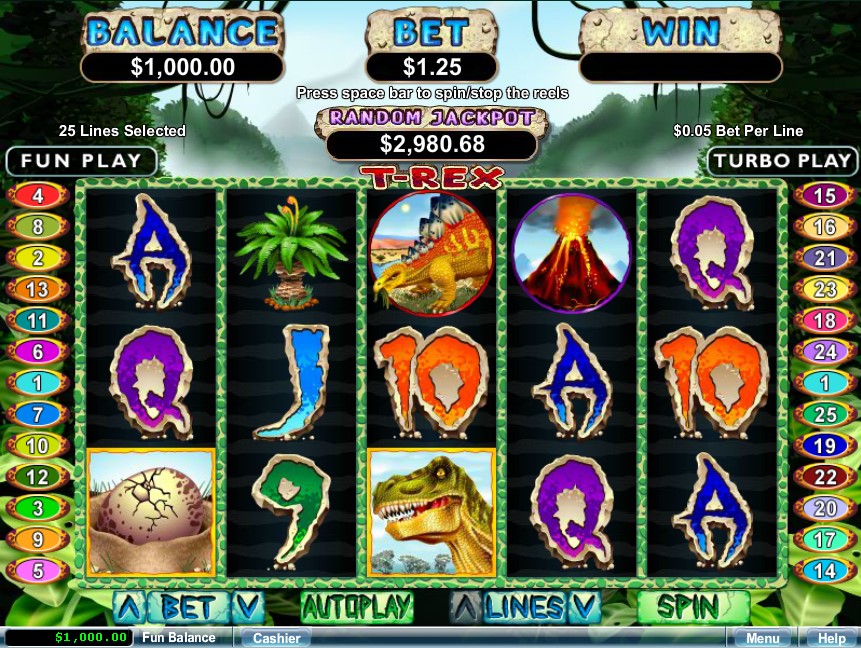 This 5-reel 20-payline pokie brings you back to the Jurassic period where giant lizards ruled the Earth. The game accepts bets up to $1 per line and pays line prizes up to x5000 and twice as much for combinations with a Wild symbol. A Bonus feature offers 10 retriggerable free spins with enhanced Wild symbols, while a progressive jackpot available in T-Rex boosts fun and excitement. Read the rules and tips below and roar your fortune out of it!

The game is marked with prizes clearly above the average level. It is certainly of interest for Aussies keen on prehistoric fauna and dinosaurs as well as for those who like very big payouts. The pokie is available in PC and mobile versions and as such is available at any moment from anywhere.

This is the prehistoric world! It is hard to breath in thick air, volcanoes are erupting here and there, and dinosaurs are roaming at large. Here you may activate up to 20 paylines and bet between $0.01 and $1 per line. These two adjustments start your journey through Jurassic jungles where you score nice prizes and meet the absolute emperor of Earth, the ultimate predator, a T-Rex. Do not be afraid: whatever he meant back then, here and now he means good.

The game unfolds the plot with the help of symbols. There are 11 non-feature icons, a T-Rex Wild symbol and a Dino Egg Scatter. Non-feature icons include six prehistoric playing cards from 9 through to A, Plant, Volcano, Ankylosaurus, Triceratops and Stegosaurus. These icons pay from left to right when you land 3, 4 or 5 of a kind (in case of playing cards) and or 2, 3, 4 or 5 matching icons in all other cases. Payouts start at x2 and progressing to x5000. This is a good reason to play with the dinosaurs for real money. Yet there is even better reason to play the game online and spend a while more time with it.

A T-Rex is a Wild symbol and an ultimate ruler of the gameplay. It appears on reel 3 during a normal game and eats up or substitutes for any non-feature symbol. When a T-Rex Wild steps into a line combination, it shakes the ground and doubles the prize. So with only 1 Wild your combination may raise to as much as x10000 a line bet. Furthermore, a T-Rex Wild gets truly fearsome and unstoppable during a Bonus Feature.

There is also an essential thing, an item without which dinosaurs would have never appeared on Earth. It is a Dino Egg Scatter. It appears in any position on any reel and pays regardless of any paylines, active or not. Landing 3, 4 or 5 Scatters awards you x1, x10 or x200 a total bet (up to $5,000 at max).

The game is equipped with an autoplay feature. It offers diverse settings and adjustments and you may fully rely on it when you switch it on.

Each time a spin results in 3, 4 or 5 Dino Eggs scattered on the reels, a T-Rex’s Bonus feature triggers. Firstly, it offers you a pick round: pick an Egg and reveal the number of free games. There could be as many as 10 free spins during which T-Rex shows its Wild nature and enormous winning capacity. When a T-Rex appears on reel 3, he eats any other dinosaur on the reels and takes their places.

This means that a Wild symbol appearing on reel 3 can occupy positions of three Dinosaur symbols that land on the same spin. Thus during free spins Wild symbols may appear on each reel and improve your chances for winning.

The feature runs at line and bet settings you select for a normal game. When the feature triggers, all controls get disabled and you cannot make any new arrangements to lines and bet size. Therefore it is advisable to have all 25 lines active in advance, in a base game. The same refers to a line bet: set it as high as you can afford and let free spins present their excellent profitability.

A 5-reel 25-payline pokie by RTG is exploring Jurassic fauna and lets a T-Rex on reels. It accepts line bets up to $1 and offers a chance to score as much as x5000 a line bet and twice as much if at least 1 T-Rex Wild enters a combinations. Scatters pay up to x200 a total bet. A Bonus feature awards up to 10 free spins played with Wilds taking positions of 3 non-feature icons. There is also a progressive jackpot awarded at random to supplement any line and Scatter win in a triggering round.