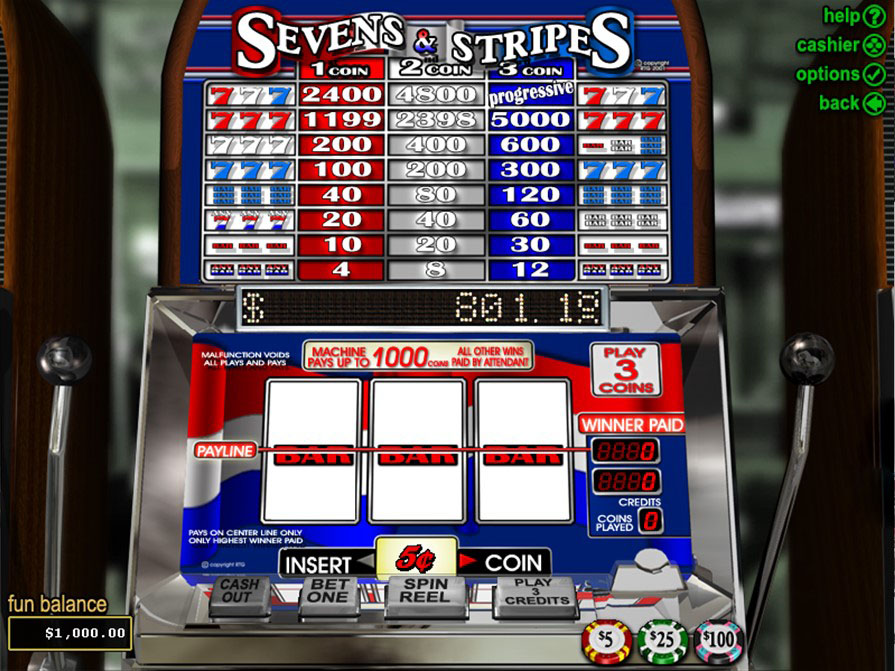 Sevens & Stripes is the most classic pokie you have ever seen in an online casino. And this is one of the most patriotic games as well. Why so? Keep reading to find out why. The pokie features three reels and a single payline crossing the reels at the center. Bet sizes vary between 5 cents and 15 dollars so the game will appeal to almost everyone, except for high rollers, who manage thousands of dollars within one game session. Anyway, the game is for 3-reel pokie fans. Join it on a mobile device or computer and win a non-progressive prize of $50,000 or a progressive jackpot.

RTG have made an impressive mix of the three-reel pokie style and the U.S. state symbols. Sevens and bars, the typical symbols that originated over a hundred years ago, are used together with the Star-Spangled Banner. Generally, the pokie looks extremely straightforward, without bells and whistles typical for modern five-reelers. The only thing that would certainly catch your attention is the U.S. flag flying behind the reels.

The user interface differs from what you might have seen in other RTG’s titles. It is sleeker and has a style of a professional non-entertainment app with straight lines, strict fonts and a restrained color scheme. Anyway, everything is easy and clear, even for an online casino novice. Each button has a title that explains their functions.

Another point of interest around Sevens & Stripes is a plethora of combinations shown in the paytable. Having only 6 regular icons, the paytable lists 10 possible combinations, each awarding differently based on the number of coins wagered, 1, 2 or 3. And this diversity in combinations has an important consequence: almost every paid spin results in one or another winning combination.

The symbols are single, double and triple bars. Moving on up the paytable are red, blue and white sevens. The three bar variants have the same colors as sevens, that is, the patriotic colors of the national flag.

The least valuable combination that awards 4 credits is the mix of bar variations. If you get, for example, a single + double + double bar, you will receive the said money prize. By the way, absolutely each payout is higher than a total bet, and this is of rare occurrence for today.

A red single, white double and blue triple bar awards 10, 20 and 40 credits, respectively. To finish with the bar icons, the most beneficial combo, which pays 200 credits, comprises a single, double and triple bar, placed exactly in the same order as specified.

Sevens are more valuable in this pokie. Blue 7’s pay out 100 credits, white 7’s give away 200 credits and red 7’s award 1199 credits, all for three of a kind. There is also a mixed combo that awards 20 credits for any mixture of these symbols.

Most 3-reel games have disproportionate payouts on a top combination and betting full coins gives the chance to win more than a straight multiplier. As against these bonus multiplier pokies, Sevens & Stripes provides a proportional amount of credits for one, two and three coins. For example, a combination of three blue 7’s awards 100, 200 and 300 credits on wagering 1, 2 and 3 coins, respectively. Going from 1 to 3 coins is just a straight multiplier so there is no special reason to bet more than one coin if it was not for a progressive jackpot.

The progressive jackpot is won on hitting a red, white and blue seven in this exact sequence. And you should wager three coins to be eligible for the jackpot.

There is also an interesting system used in calculating the jackpot. First off, this is a bet size-driven value. Whenever you toggle a coin denomination from $0.05 to $0.25 to $0.50, the progressive jackpot indicator shows different values, with the highest one being for a $0.50 coin.

Second, the opportunity to win the jackpot disappears for coin values of $1 and $5. Some may think this is not fair. However, the pokie has a unique offer for these cases. If you place three coins and select a coin size of either $1 or $5, the combination of three 7’s will pay you 10,000 credits which is even better than the progressive jackpot because the latter tends to be lower than 10,000 credits. Sure, you have to play for real money to finally win the jackpot sum.

Sevens & Stripes is a classic three-coin pokie with a single payline. It has six regular symbols and no special features except for a progressive jackpot awarded on hitting a certain combination. Bet sizes of $0.05 to $15 are comfortable for many players.