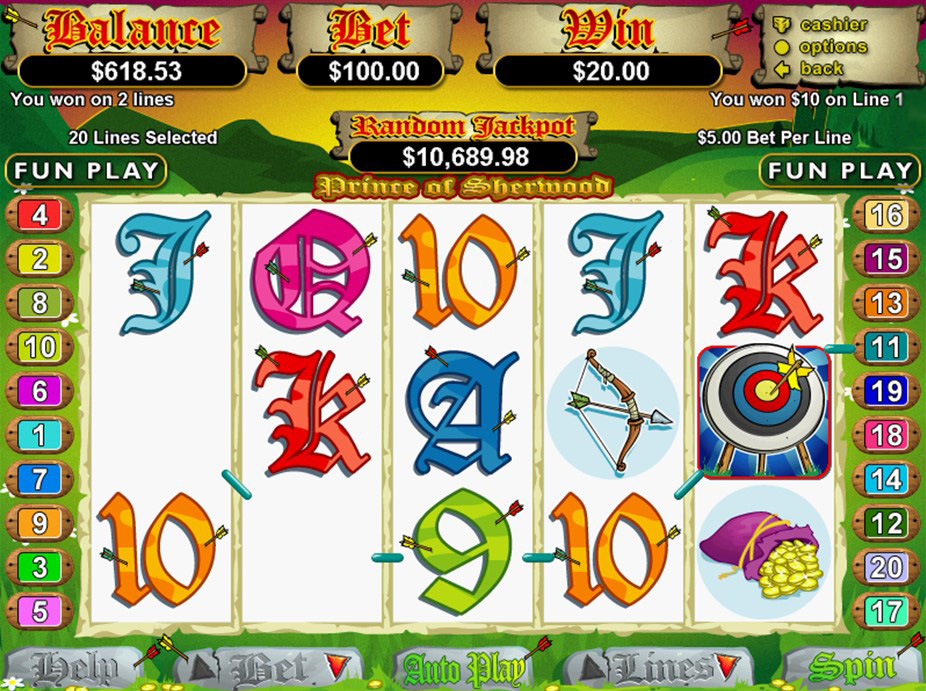 Prince of Sherwood is a 5-reel pokie with 20 lines and a random progressive jackpot. Inspired by a Robin Hood story, it features an exciting bonus feature that involves shooting arrows at targets and winning up to $10,000. The pokie has a free spin session with a variable number of free spins (5 to 25) played at multipliers of x2 to x6. Bet sizes are designed to be suitable for most online casino users, especially for thrifty gamblers. Prince of Sherwood also looks good on smaller screens of mobile devices.

Robin Hood legends have been adapted to numerous films, animated cartoons, TV series and video games. Realtime Gaming transferred the fabulous character into this pokie, filling it with adequate imagery to make you feel captivated by the whole story. Though the picture style is somewhat outdated, you will still be excited to see Robin Hood, his sharp arrowheads and sacks of gold coins that he robs from the rich to give to the poor.

The pokie model is well-familiar for all 5-reel pokie enthusiasts. It is based on paylines which are used as patterns for symbol combinations. Some symbols ¬– preferably of low value – pay out when 3+ land, while other, high-valued pics, give you a cash prize when two of the same are visible on a payline. Combos need to land from left to right, starting at reel 1.

A bet is placed by using the buttons under the reels. Clicking Bet selects a line bet between $0.01 and $5 – each line takes only one coin. Using the Line selector designed as a rough-hewn boulder, you activate or switch off the paylines. If playing at max lines, you can wager $0.20 to $100 per spin. The top three non-feature payouts in the pokie are $12,500, $6250 and $5000. They are achieved when wagering the top five-dollar amount per line.

A brave Robin Hood wearing a green hat and back quiver is a wild symbol. This is a very useful feature pic though it has a few drawbacks in addition to its unmatched advantages. First off, it substitutes for all pictures except for scatters. Second, it appears on the first and fifth reels only, and this is a shortcoming in general.

When at least one wild symbol is found in a winning combination, payouts for those symbols get doubled. Thus, potentially winnable regular payouts increase to $25,000 at max.

The game has two scatters yet only one of them, a Castle, provides instant payouts in base game. Two to five castles found in any position after the reels have stopped award x1 to x100 the total bet. If betting full coins of the maximum denomination you can win $10,000 for five scatters.

This is a two-tiered feature that culminates in free spins if you make it to the second level. The second-screen bonus is activated by 3+ targets. You will see two archers standing at a shooting line and your task is to select one of them. Then both archers release one arrow each, awarding an instant gift of x2 to x100 the total bet. If your selected archer has earned you a higher prize than another archer, you receive that prize and proceed to Bonus Level 2. If your archer has lost the contest, you get the related reward and return to base game.

The second bonus round looks the same except that only one archer is ready to shoot an arrow at the target. He releases two arrows. One of them awards 5, 10, 15, 20 or 25 free games, while the second arrow earns you a multiplier of x2 to x6 for the upcoming free spins. When the feature is over, you proceed automatically to a free spin session.

During free spins, the Target scatter becomes a payable symbol as against base game where it pays out nothing. When 2 to 5 Archery Targets land left to right, you get a scatter payout of x2 to x200 the total bet (up to $20,000). Knowing that the feature is played with a bonus multiplier of x2 to x6, the maximum potential win is $120,000 – a great incentive to play the pokie for real money.

Prince of Sherwood has a progressive jackpot and similar to other games from RTG, this is a local random jackpot. The amount mounted so far is displayed with real-time changes above the reels. Players who wager 20 cents are not deprived of the chance to win the progressive jackpot but the winning probabilities are lower than if you bet higher. Visiting the recommended online casino and playing the pokie on a mobile device, you get the same chances of hitting the jackpot – the only important aspect is that real money must be wagered.

Prince of Sherwood is RTG’s video pokie with 5 reels and 20 paylines. It has a random progressive jackpot, a wild multiplier and two scatters, one of which triggers a two-level bonus round. During the bonus you can win instant cash and unlock 5 to 25 free spins with a multiplier of x2 to x6.