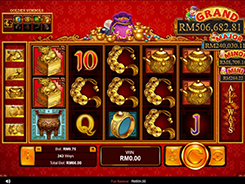 Since October 2018, both mobile and computer users can enjoy an Asian pokie that is full of oriental mystery and generosity. With lots of golden symbols, Plentiful Treasure looks rich and posh, and the pokie will share the riches with the most persevering punters who do not hesitate to wager the maximum of $100 on a spin. The four smiling gods release four different progressive jackpots that continue growing every moment. For those loving wild symbols, the pokie has two of them, and a wild Pearl bears a great multiplier of x2 to x5.

Plentiful Treasures has no paylines. The fifteen Asian-styled pictures, which are visible on the screen, combine in a winning sequence if three or more of the same land on adjacent reels left to right. This game model is widely known as “243 ways to win” and it goes without paylines. Betting is a bit tricky in Plentiful Treasure. To the left of the reels are five clickable golden elements that change a bet size when clicked. By doing this, you increase your starting bet by x8, x18, x38, x68 and x88. Low-rollers are able to put the minimum of $0.10 into play, while heavy punters are welcome to charge $100 into each spin.

Asian symbols and their payouts

The pokie utilizes standard card values 9 to A as well as a plethora of themed imagery such as elegant rings, delicate teapots and solid jewelry boxes. The paytable offers a tangible incentive to bet higher because activating level 5 bets (a basic bet multiplied by x88), you may grab way greater win than wagering the initial 10-cent bet. Anyway, the maximum win for regular icons is 680 coins for five jewelry boxes.

Having one wild symbol is of frequent occurrence but two different wilds are rarely found in any specific pokie. Moreover, one of the wilds in Plentiful Treasure carries an extra multiplier. An intricate hieroglyph is a normal wild – it lands on three central reels only and replaces for all regular symbols.

The second wild, a white pearl, has an extra perk – it multiplies a payout by a fixed value when it makes part of a winning combination. Pearls are located on the third, central reel only. Wild multipliers applied to a payout correlate to a bet level – with each level up, the win multiplier increases by 1. If you play at a basic bet, the multiplier of x1 applies, so you get exactly the normal payout. If you play at a level 5 bet, you enjoy a multiplier of x5 when the pearl is built into a winning combination of symbols.

Designers from RTG have added some unexpected touches to free spins, making them a desirable feature for many gamblers. Eight free games begin when 3+ Bronze Cauldrons land on certain positions (on reels 2, 3 and 4 only). Before the said number of spins gets underway, the pokie pays out a scatter prize of x5, x10 or x50 the total bet, depending on the number of triggering scatters. As an additional bonus, free spins have no low-paying 9-A pics and as a consequence, potential winning combos will be higher than in base game.

The real-time jackpot values are shown above the reels. They are constantly rising because every real-money bet in Plentiful Treasure adds a small percentage to the jackpot counter. Having a local nature, the jackpots vary across online casinos. To get it hit, the player has to spin in three Coin symbols that will open a bonus game.

Jackpots are not available for everyone because there are certain qualifying requirements. When playing at the basic size, no jackpots can be won. On bet level 2, 3, 4 and 5, the wager increases and jackpots Mini (the lowest), Minor, Major and Grand (the highest) get unlocked one by one. If playing on bet level 5 (the minimum of $0.88 is needed), all the four progressive jackpots are on display and ready to be grabbed by a lucky one.

If three coins do appear, the jackpot bonus game starts. The player will see 12 golden coins, each revealing one of four gods when clicked, and each god corresponds to one of four jackpots. The feature runs until the player collects three identical gods, thus winning a respective grand prize. That said, the player is guaranteed to end up with whatever jackpot.

Plentiful Treasure is a 5-reel progressive pokie with four jackpots and the minimum qualifying bet of $0.88. The pokie has two wilds (one of them bears win multipliers up to x5) and free spins with advanced payouts. Bet sizes are $0.10 to $100 per spin.