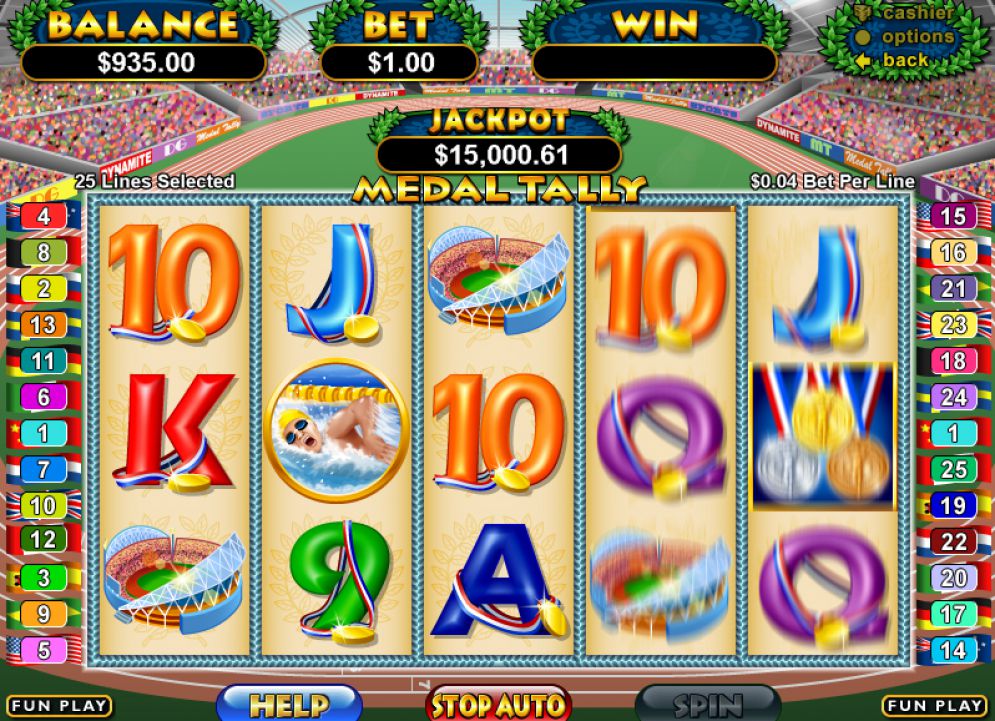 Medal Tally is a sports-themed video pokie with 5 reels and 25 paylines. This online game has just a couple of features yet it will impress you with the non-progressive prize of 10,000 coins, awarded for five medals. During a free spin session you are to collect medals that can bring you a coveted progressive jackpot. This is the pokie for every budget because you can wager as low as $1 and enjoy great prizes brought to you by RTG.

The background image behind the reels can be described with the Olympic motto Citius, Altius, Fortius. A big stadium full of spectators, 25 national flags (each placed behind line number tags on both sides of the gaming field) and laurel wreaths on UI elements create the atmosphere of professional sports, hot competition and resounding victories.

In Medal Tally, you will see a familiar 5×3 field and payline-based structure. Most symbols award a cash prize when at least 3 of the same pics are arranged on an active line. Yet there are two non-feature symbols (Runner and Bicyclist) that pay 5 coins when two of the same appear. Actually, the gameplay is predictable – you will hardly find it difficult even should you play pokies for the first time.

RTG, the pokie vendor, have designed a package of sports-related symbols and added 6 traditional playing cards to the set. The latter are decorated with medals to be closer to the sports theme. Low-paying pics are 9 and 10 – both occur fairly often on the screen and award x5 to x200 for five of a kind. The playing cards J, Q, K and A are more profitable as they pay x5 to x800. Interestingly, in most pokies the symbols like these are of low value and their winnings rarely exceed x200.

The remaining symbols are associated with sports and include Swimmer (x1500), Stadium (x1500), Biker (x2000) and Runner (x5000). All regular symbols listed above should be aligned in a proper way, from left to right and on active paylines.

There is an unusual approach to bet sizes. The game has a fixed 4-cent value for each payline. And the player cannot adjust this setting or decrease the number of active lines. Every paid spin costs $1, which is a very low amount for a progressive pokie. With the fixed one-dollar bet, the top three payouts contributed by regular symbols are $200 (five Runners), $80 (five Bikers) and $60 (five Stadiums/Swimmers).

As the player cannot introduce any adjustments to a bet size, there are no bet-related buttons. Under the reels, you can see only three buttons such as Help, which opens the paytable, Autoplay and Spin.

A picture of three medals, bronze, silver and golden ones, is a wild. As any wild symbol out there, it substitutes for regular pictures and helps them complete winning combos. The ability to create independent combos is another benefit of the wild. Whenever two or more of them appear left to right, as any other regular pic, the wilds pay out x10 to x10,000. That said, you will grab $400 for a five-of-a-kind combination.

There is a scatter symbol depicted by a laurel wreath with the golden word Feature! on it. Unlike other symbols in the pokie, whether non-feature or bonus ones, they do not have direct payouts. This means you can see them on the reels but they fail to pay, however numerous they are. From the other hand, three or more laurel wreaths trigger a feature. You receive 10, 15 or 20 free games for hitting 3, 4 or 5 scatters.

After the last free spin has been played, the pokie counts the medals you have accumulated during the feature and then pays out a respective cash award. For example, if you collect 2 medals, you will receive x5 your total bet in addition to other wins in free spins. The highest bonus prize of x1000 the total bet is granted for accumulating 45 to 49 medals. This amount is equivalent to $1000.

Many RTG pokies have a random progressive jackpot that can be granted at the completion of any spin. In Medal Tally, the jackpot can be won from within free spins, not in base game. The winning requirement is to collect 50+ medals by the end of free spins. Should this happen, you will immediately hit the jackpot in accordance with the amount displayed above the reels.

Medal Tally is a sports-themed video pokie which is available at a $1 bet only. The top non-progressive prize in the online game is x1000 times the total bet. Features include a wild symbol, which pays out x10,000 a line bet, and free spins that award generous cash based on how many medals have been collected during free spins.