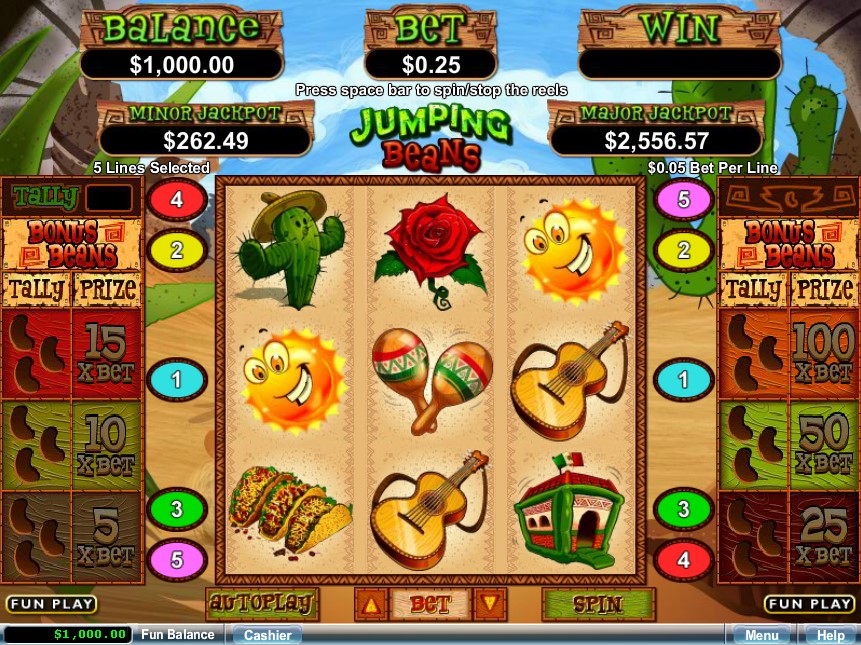 This 3-reel 5-payline pokie brings you to Mexico where festivities never stop. Join a happy-go-lucky jumping Mr. Bean and charming Mrs. Bean and place up to $0.10 per line. It gives you a chance to score line wins up to x100 a line bet. Wilds double prizes and pay up to x1000 a line bet. An Auto Nudge feature will help you win cash while a Bonus Bean feature will award up to 15 free spins and a generous bonus prize up. Read the rules and tips below and start celebrating!

Set against the background of a festival in a Mexican village, the pokie features all respective images including agaves, cactuses, roses, guitars, Cuban rattles, tacos and of course local celebrities including charming Mr. and Mrs. Bean, bad-tempered Bandido Beans and generous Bonus Beans, all jumping. Yet these are not images and characters that make the game an outstanding pokie. Despite the fact the game has only 3 reels and 5 lines, it is very rich in features and this makes playing Jumping Beans an exciting and rewarding entertainment. In fact, so richly equipped 3-reel slot is quite a rare thing in online casinos.

All 5 paylines are constantly on so the only adjustment required for starting the game is a line bet. It is changed within a range from $0.01 up to $0.10 per line. Be aware that a line bet you select for a base game is going to be played when features activate. The slot offers a whole bunch of features the full winning capacity of which is implemented at the maximum bet, this is why it is advisable to place the highest bet possible in a normal mode.

Although the play field has only 9 positions, there are many pokie symbols including 10 non-feature icons, a Wild and a Scatter. Non-feature symbols include Suns, Local de Copas, Bandido Beans, Cactuses, Roses, Guitars, Cuban Rattles, single Taco, double Taco and triple Taco. These pay from left to right when you land 2 or 3 matching icons on any payline. The payouts are between x2 and x100 a line bet.

Mr. Bean is a Wild symbol, an appealing character and your very good friend. He is going to amaze you with his incredible jumping ability and he is also a substitute for all non-feature symbols. Mr. Bean also offers cash prizes: landing 1, 2 or 3 Wilds on lines awards you x2, x20 or x1000 a line bet. Mrs. Bean is also in the game, she is a Scatter. She does not pay out yet she offers a nudge and triggers a Bonus Bean feature.

The gameplay radiates a sheer festive mood and keeps you smiling all the way through spins and features. The imagery and ambience are captivating, yet in case you have to deal with something else you do not have to quit because an autoplay mode available in the pokie takes care of the gameplay while you are off. The autoplay feature is available in desktop and mobile versions.

It is a small but valuable bonus designed in a fairly generous way. Each time you win and a respective prize is paid, you get a nudge. A nudge is given by a Wild or Scatter when either is one position short of appearing on the reels, i. e. when either icon is one position above or below the game field. After a nudge the situation on the reels may change and there can be new combinations. If there are any, you get a respective prize, so you may earn prizes two times at a price of one spin. If an Auto Nudge results in three Scatters being visible on the screen, they award you a Bonus Bean feature.

When an Auto Nudge feature results in three Scatters on the reels, they activate another bonus game, a Bonus Bean feature. It awards you 10 free games during which each bean icon including Mr. Bean, Mrs. Bean and Bandido Bean earns you a bonus bean. Bonus beans accumulate in a bonus bean tally having 6 levels, or 6 shelves. It takes 3 beans to fill a level, each level is associated with a Bonus Bean prize to be paid when the feature completes. Levels 1 to 6 award x5 to x100 a total bet in a triggering round.

Only completed levels on the tally award a respective bonus and only the highest level you achieve during the feature pays a bonus. This means that climbing up to level 5 on the bonus bean tally, you get a prize of x50 a total bet after the completion of the feature, not prizes for levels 1 to 4.

You need as many as 18 bonus beans to fill in the bonus bean tally and it looks like a challenging task. On the other hand, there are three icons earning beans for you (a Wild, a Scatter and a non-feature symbol) and you may also win 5 extra free games. To win five free spins, you need to land 3 Scatters in the Auto Nudge feature during free games. All in all, the feature is designed in an intriguing way and brings much fun into the gameplay.

The game is truly exciting and twice as captivating when you quit a fun mode and play for real money. It is even so due to a selection of features topped by a crown with two pearls at once. It is a progressive jackpot feature giving you a chance to win either a Minor or Major progressive jackpot.

Both prizes are progressive and they are growing as you play. You may check the currently available amounts at any moment, just look at jackpot meters right above the reels. Both prizes are awarded at random, after any completed spin, be that a paid spin of a free spin, no requirements or limits are set. A jackpot prize is paid as an extra amount in addition to any and all line and Wild prizes or bonuses you get in a triggering round.

This 3-reel 5-payline pokie by RTG is an impressive game with many bonus features. It accepts bets up to $0.10 per line and offers an opportunity to win up to x100 a line bet in base game. Wilds double line prizes and pay up to x1000. An Auto Nudge feature helps you win and trigger a Bonus Bean feature with up 15 free spins and extra cash prizes of x100 a total bet. Two randomly awarded progressive jackpots will culminate your online casino experience.