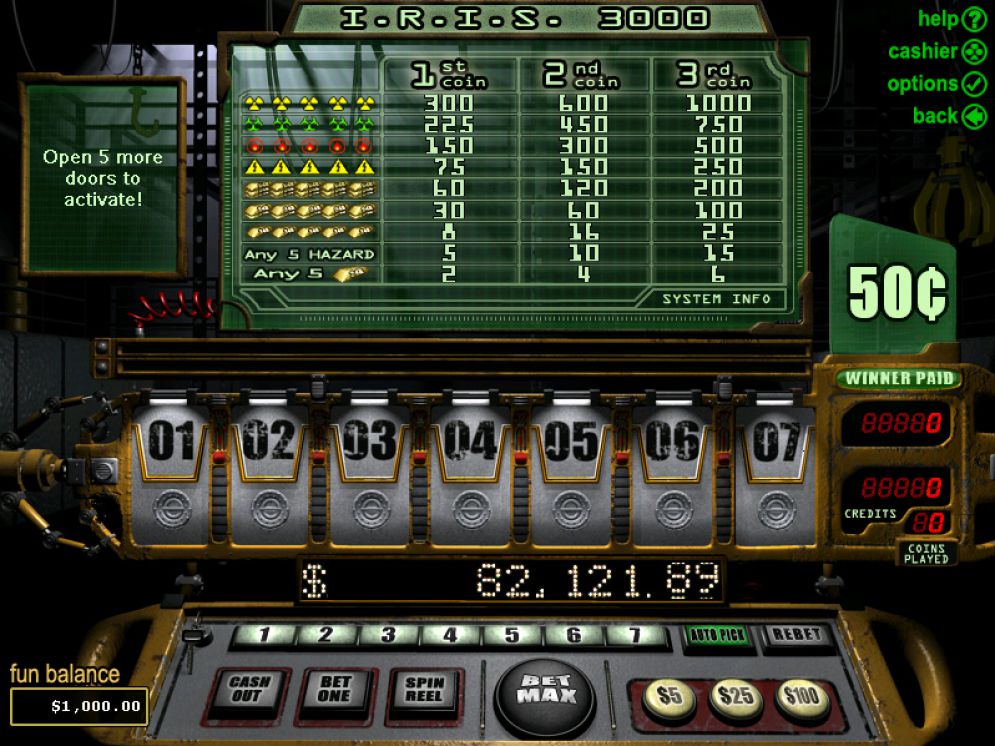 This is a totally unique game that can hardly be called a pokie because it looks incredibly strange and is thousands of miles away from a typical game with 3 or 5 reels. The most important aspect about the game is that it has a progressive jackpot that seeds at $25,000, and good cash prizes of up to 1000 coins. No wilds or scatter symbols are attached to the gameplay yet it is so unconventional that all standard pokie-related terms do not suffice to describe what’s happening on the game screen before and after you click Spin. If playing for real money, the max non-progressive award is $5000.

I.R.I.S. is the acronym for Interactive Real Intelligence Slot and it is designed as a mechanical device or control panel used at some military facility, nuclear plant or the like. Just a glance at the pokie tells you this is a brand-new solution, which looks entirely different from what you might be used to in online casinos.

How to play the I.R.I.S. game online?

The central gaming field is represented by 7 doors which are similar to reels in the generic sense. Under the seven reels there is a complex user interface with seven numbered buttons. Before every spin you should select which of the five doors to open. The doors then unlock and show one symbol on each so the pokie actually has a single payline. If you hesitate to make a choice by yourself, click the Auto Pick button and the game software will make the choice automatically. Doors 6 and 7 can be opened during the spin, increasing your chances to make a combination and ultimately win a progressive jackpot.

The symbols used in the pokie have military motifs. The paytable is visible right above the reels and it shows payouts in three columns, for the 1st, 2nd and 3rd coin, respectively. At the bottom of the paytable are single, double and triple 24K gold bars, which award 8, 30 and 60 coins, accordingly. The High Voltage Hazard sign awards 75 coins. The Inflammation Hazard sign will see you enjoying 150 coins. The Biological Hazard symbols awards 225 coins and the most valuable, Radiation Hazard symbols pays out 300 coins.

There are also two paytable rows that display an Any 5 Hazard combination with the payout of 5 coins and an Any 5 Bar combination with 2 coins awarded. These low-paying combos allow you to create mixed-symbol wins and receive some cash prizes, though not high.

A coin value is fixed at 50 cents yet you can bet 1, 2 or 3 coins on the single line so there are only three bet sizes in the pokie: $0.50, $1 and $1.50 per round. Betting one coin, you have payline wins only. Betting 2 or 3 coins, you enjoy an advanced gameplay with a bonus feature. Each reel contains only one symbol and each normal combo, except for mixed ones, should consist of five identical symbols.

After selecting five doors to open, placing a bet and clicking Spin Reel, a round begins. If you place 50 cents, you will see only five open doors and five symbols on them. If you bet $1, a red laser beam begins scanning the doors while the reels are spinning. If it stops on a closed door, it will open and show the sixth symbol. It is clear that having one more position on the screen improves your chances of getting a five-of-a-kind combination.

If you bet full coins ($1.50 per round), two laser beam will move along the doors and can stop on closed doors. If all the 7 doors are open, an extra reel will spin to show a random multiplier of x2 to x10 to be applied to the current winning combination, if any. Imagine getting five green Biological Hazard signs plus a multiplier of x10. In this case, you will grab $3750, which is one of the largest non-progressive prizes in I.R.I.S. 3000.

Is it worth wagering 3 coins?

In layman’s terms, definitely yes. Betting two coins increases payouts exactly twice. For example, five High Voltage symbols award 75 and 150 coins on the first and second coin, respectively. When you bet $1.50, you get some bonus wins, for example, five High Voltage signs pay x250 on the third coin, not x225. The same rule refers to most symbol combinations. When betting three coins, You actually improve the winning odds built into the pokie by default.

The progressive jackpot is shown under the reels and it starts at $25,000 after being won by a lucky gambler. To win the jackpot, you need to play at the maximum $1.5 bet, get five Radiation Hazard icons inside the doors and earn a multiplier of x10. Needless to say, only real-money bets qualify.

Failure to get a multiplier of x10 on the said combination leads to a regular win of 1000 coins, which is the first largest non-progressive reward in the game online.

I.R.I.S. 3000 is a glaring example of creativity of RTG pokie makers. It contradicts all set trends in the industry and offers a unique gaming experience beyond compare. The progressive jackpot is won by hitting a certain combination while playing not less than $1.5 per spin. Being a mobile compatible title, I.R.I.S. 3000 offers the same unique features and the progressive jackpot for all platforms, whether desktop or mobile.