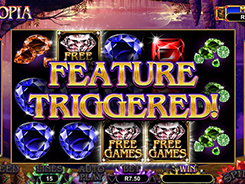 Gemtopia is a 5-reel 15-payline video pokie that has gems as the central theme. Availability of a local progressive jackpot is the first incentive of why the player should try the pokie. Free spins, instant bonus wins and a wild symbols give the player more reasons of why to find this pokie in a favorite online casino and play it for real money. Gemtopia is a solid, elegant and rich game that strikes players’ eyes with color, light and glitz.

The game provides the player with a plethora of winning opportunities because matching symbols are taken into account when they occur from reel 1 rightward and from reel 5 leftward. This system is widely known as “Win Both Ways”. Thus, the player has actually twice as much as 15 paylines.

The player has a trip to Gemtopia, a fictional land where gemstones are found everywhere. No notorious playing cards are used in the pokie. Rubies, small emeralds, big oval rainbow-colored spotted gems – the reels are covered with gems only. Seeing processed precious stones on the reels creates a comfortable and relaxing atmosphere, especially in view of a progressive jackpot that can be hit at any time regardless of a bet size.

Bet sizes are focused on rather low-budget bettors. The minimum bet amount corresponds to one cent per line, or a total of 15 cents on each spin. The bet can be increased up to $1.50 per spin, and this is a great range for low-rollers.

Payouts are as follows: x40 for green and yellow gems, x50 for brown gems, x60 for a big sapphire, x100 for a diamond, x200 for a square ruby and x500 for an oval multi-colored gem. In dollar terms, five rainbow gemstones gathered on an active line award the maximum of $50.

A big, weighty white diamond is a rara avis in real life and in the pokie. It lands on three central reels only and substitutes for all non-feature pictures. When it got in place, the wild expands up and/or down to fill in the entire reel and the player is then awarded a paytable win.

When the said game situation occurs, the reel with the expanding wild on it will become fixed while the remainder undergo one free respin. If, following the first respin, another expanding wild stops anywhere, the related reel will get fixed and the second respin takes place. Payouts are fulfilled after each respin.

A rosy diamond shown standing on its sharp point gives access to a shining bonus feature which is free for the player. Three ruby diamonds occurred on reels 2, 3 and 4 double the initial bet and award 15 free games. The course of the feature is full of lustrous and lucrative bonuses and can end up with the player having a huge win. The first exciting feature active in free games is a yellow Bonus gem. Getting three of them leads to two consequences:

The pokie has two locally accumulated progressive jackpots, Minor and Major, which differ in size and winning probabilities. Betting real money is a condition precedent for winning but a bet size is taken out of equation because even the minimum 15-cent is eligible for it. Either jackpot is awarded at random and can be won at any spin in normal game. Jackpots grow slowly but steadily, with 1.5% being deducted from every real-money bet placed on that game in the online casino the player is in.

Gemtopia is a gem-themed video pokie with 5 reels and 15 lines that pay from both left to right and right to left. It has two progressive jackpots hit randomly. Adding fun are stacked wilds that initiate one respin, and a free spin bonus with instantaneous bonus wins in the course. Gemtopia is a good choice for players with limited bankroll because the min bet is merely 10 cents.