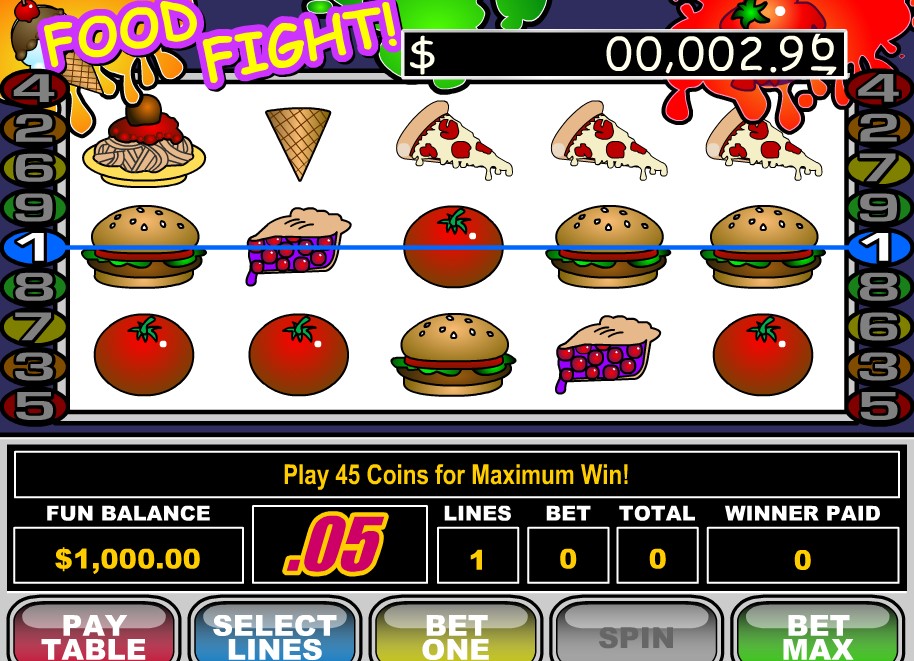 Food Fight is a 5-reel 9-payline video slot that explores a food theme. It offers a progressive jackpot triggered on hitting a certain combination of symbols. Besides, you can entertain yourself, while waiting for your dinner, by throwing pies at cooks and restaurant visitors. Features in the pokie include an Ice Cream Scatter bonus in which you are to assemble an ice cream cone out of three pieces, and an exhilarating Food Fight bonus with generous prizes of up 3960 coins. The highest non-progressive reward in the online game is $20,000.

The slot has a familiar 5×3 layout and only 9 paylines. You can remove any number of paylines and bet on only one of them, if desired. The pokie transports you to an ordinary café that treats guests with yummy blackberry pies, pizza and ice cream. These and other appetizing pictures bring you wins according to the paytable when there are at least two or three matching symbols on any active line from left to right.

How to get started in Food Fight pokie

The user interface is a bit unusual for RTG, the pokie provider, yet there is nothing complicated about it. There are five buttons and a coin value selector. The Paytable button opens the game rules with symbol winnings. The Lines button enables you to add active lines (up to 9). Be careful with this game aspect because only one line is active by default – you need to click the button a couple of times before you activate the entire set of paylines.

By clicking the Bet One control you place 1 to 5 coins per line. Actually, there is no much difference whether you play with 1 or 5 coins – you just get bigger wins proportionally to the number of coins. But there is one catch. Playing with five coins unlocks a progressive jackpot that is unavailable playing 4, and fewer, coins. The remaining buttons, Spin and Bet Max, are self-evident: the former begins a paid round and the latter places full coins of the selected denomination.

The pokie has no wild symbol. But the absence of a wild is not perceived as a disadvantage because it has two interesting bonus features that make up for the lack of a wild symbol.

The paytable is a bit messy as it displays combination profits for each coin. All the symbols presented in the pokie belong to a food theme, including a burger (x75), a tomato (x100), a blueberry pie (x150), a slice of pizza (x250), pasta (x500) and pudding (x1000). The payouts specified above are for five of a kind. There are also a few feature symbols which also fall under the category of foodstuff.

There are three scatter symbols representing three parts of an ice cream cone: an empty wafer-style cone, a scoop of strawberry ice cream and chocolate topping with a cherry on top. Useless separately, these three symbols trigger the feature when all of them become visible on the screen, no matter their position. The feature is simple – you get a scatter payout of up to 405 coins depending on your bet size and the number of active lines in the triggering round.

This is the most spectacular and profitable part of the pokie, except for perhaps the progressive jackpot. To get into the bonus, you should hit three pieces of a pie such as a crust, meringue and strawberry. Similarly to the first feature described above, these three parts trigger the Food Fight bonus when all of them appear anywhere on the screen.

You are then taken to a second screen that shows five people: a professor, a cookie seller, a female cook, a male cook holding a rolling pin, and a happy café visitor. You are asked to choose your victim and throw a cake at him or her. Each successful hit brings you a cash prize. The feature continues until the first miss. Cash prizes are determined by a bet size and the number of active paylines that were effective in the triggering round. Overall, the maximum bonus win reaches 3960 coins ($19,800).

The pokie has a local progressive jackpot. Its amount is normally much smaller as compared to giant networked jackpots yet the one offered in Food Fight is easier to be won. To be eligible, you need to play full coins of any denomination. Thus, low-budget gamblers should wager the minimum of $0.45 to qualify. The jackpot is unleashed when you hit five pudding symbols on any active line. Failure to play five coins leads to a regular payout of 6250 coins for this combination. If you play the game online on your desktop or mobile, make sure you bet real money and cover all the five paylines to avoid missing out the progressive jackpot prize.

Food Fight is a progressive pokie with 5 reels, 9 paylines and a food theme. Played without wilds and free spins, the pokie has two exciting features such as Ice Cream Scatter and Food Fight Bonus with the max possible prize of almost 4000 coins. Flexible bet sizes ($0.09 to $225) makes the pokie perfect for all kinds of online casino users.