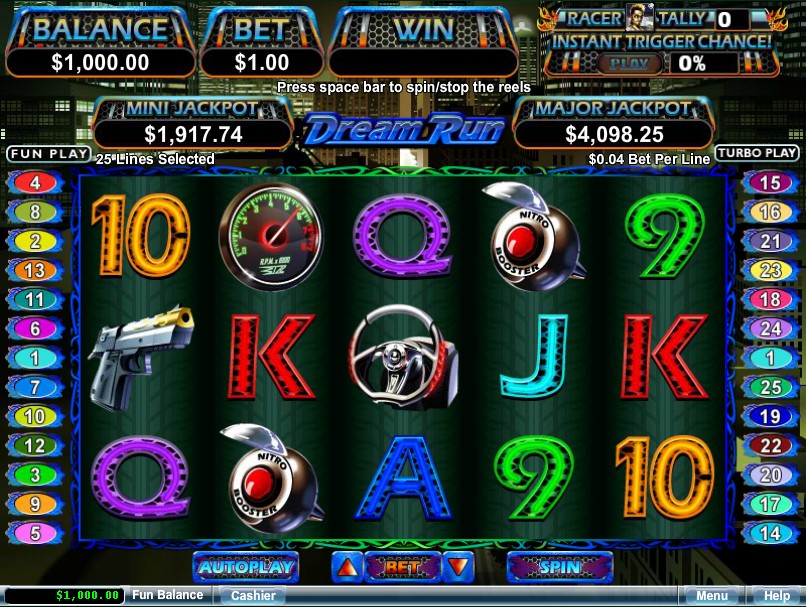 Dream Run is a 5-reel video pokie themed around car racing. It features a distinctive automobile theme, a pack of auto related symbols and a couple of outstanding bonus games that are more like an arcade mini game than a typical pokie feature. Dream Run offers you a chance to grab a progressive jackpot and win up to 100 free spins. Wager real money, fill in the Racer Tally and then participate in a Nitro Racing to win big prizes. This mobile-compatible pokie will make you feel a thrill in anticipation of your car finishing first and earn you a sought-after progressive jackpot!

Grand Theft Auto and Need for Speed games harvested millions of loyal fans around the world. These video games have spawned dozens of additional games and expansion packs that, taken together, create a vast virtual world in which the player has to advance from a criminal underling to kingpin. Dream Run, a game from RTG, has the look and feel of these video games. The visual design of the symbols is fast and furious – colored card values 9 to A resemble tire prints and the whole action evolves on the background of a big night city. The pokie is extremely popular in online casinos because of its simple but varied gameplay.

The rules here are very simple and anyone can understand them. The main game field contains 15 symbols visible at any time and the game itself has a standard 5×3 configuration with 25 fixed paylines. The player has only one setting to configure before clicking Spin and set the reels in motion – this is a line bet. It is available in a couple of values starting at one cent and going up to $0.25. Given the number of lines, the min/max bets are $0.25/$6.25, accordingly.

The Racer and his Opponent are wild symbols. They cannot be located on the same reels and their areas of influence are distributed as follows: the Racer appears on the first reel only and the Opponent can occupy any place on reels 2 to 5. Actually, both have similar but not identical functionality. Both are substitutes for all regular pics but the Racer also has a built-in multiplier of x3 applied to all wins it is involved in. So hitting, for example, four Women with a checkered flag and one Racer on the first reel will award you 7500 coins (up to $1500 at max) instead of a normal x1500.

A white light is a scatter. When two or more white lights appear in any position, they will turn into red or green lights. Red signals are useless but green ones unlock a feature if at least three of them are on the reels. Besides, 2 to 5 green lights pay scatter wins of up to x100 the total bet ($625 at max).

You are first to pick one of five race cars. They will then drive off the starting line and all you have to do is just watch the intense, realistic and immersive simulation of the car race with crazy stunts and awesome graphics. The reward you get at the end of the feature depends on the finishing place of your selected car. For the 1st to 5th place, you are awarded 25, 20, 15, 10 or 5 free games, accordingly.

If the car that you have picked crossed the finish line first, second or third, you advance to Level 2 and get one more race. The rules of the second race are the same but the rewards are higher: you will grab x5 to x100 times the triggering bet ($625 at max) for the 1st to 5th place.

Ultimately, if your car is the first or second to complete a Level 2 lap, you proceed to Level 3 where a multiplier of x3 to x7 is awarded following the results of the race.

Nitro Racing bonus: Your way to a progressive jackpot

The feature is activated in an unusual way. At the top right corner of the game screen there is a Racer counter. Each Wild Racer icon appearing on the screen adds to the counter and once 10 Racers are collected, you gain access to the Nitro Racing feature. The logic of the bonus is nearly the same as above – you earn free spins, instant cash and multipliers by progressing through race laps. The only difference is that Level 3 is not the final stage as in Dream Racing bonus above. If you selected car finishes 1st or 2nd, you enter the final Jackpot level where you can hit either the Major or Mini jackpot.

You can attempt to trigger the Nitro Racing feature bypassing the normal rules described above. You can click the Play button under the Racer counter and see your chances to get the feature unlocked. The more Racers you have accumulated, the higher the probabilities of unlocking the Nitro Racing event. On the flip side, a non-successful attempt will reset the Racer counter to zero and you will have to begin collecting Racers from scratch.

Dream Run is a 5-reel 25-payline slot based on a car racing theme and featuring two local progressive jackpots. Key features include Nitro Racing and Dream Run Racing bonuses as well as two wild symbols. This is an awesome mobile-friendly online game that will entertain you for many hours without your getting tired.