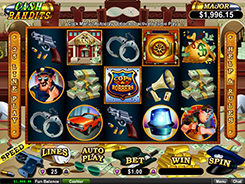 RTG released Cash Bandits in summer 2015, and made it compatible with Android/iOS devices. The pokie is devoted to a bank heist theme and all its visuals are about it. Every tiniest element in the interface and on the reels revolves around robbery, police or sneaky criminals. The vendor retrofitted the game with high-valued wild symbols, payable scatters and a dedicated bonus game that awards up to 90 free games at x12. Two progressive jackpots cap it all off. The game will attract primarily three kinds of players: low-rollers, free spin fans and progressive jackpot hunters.

The graphic aspect in Cash Bandits perfectly fits the robbery theme. The five reels are not separated from each other, forming a united patchwork picture. All UI elements have a distinctive style: there are police hats, knives, robber’s black masks, bullets and guns under the reels. All the symbols are also thematic and include bitten doughnuts, handcuffs, money sacks, etc. Symbols that occur more often pay out x5 to 500 for five of a kind. The high-paying pics are robbers (x800 at max) and brave policemen (x1250). Cash Bandits has a normal way of awarding payouts, that is, a player has to arrange matching pics left to right, like in many other pokies.

Bets are made to appeal to casual players, not high-rollers because the largest bet is merely $2.50 per spin. There are 25 paylines and the player is given an option to change this number and wager on less. Coin denominations are not modified. Apart from the Lines control arrows, the player can alter a bet from $0.25 to $2.50 in 25-cent increments.

A golden vault door is a basic wild that has two features worth mentioning:

A Caps and Robbers police badge counts in any position. 3+ of them award x2, x20 and x200, with payouts being applicable to a total bet. If wagering the highest amount, the top jackpot will be $500 (for five scatters). Three or more badges unlock a bonus feature that can potentially add lots of money to your bankroll.

A Vault Cracking bonus game starts by 3+ scatters and it ends up with a certain amount of free spins and bonus multipliers – no direct cash is awarded. On a new screen, the player is presented with four safe or vault doors, each having a small code window consisting of 1 to 4 digits. The objective is to crack open as many safes as possible. This is done by selecting digits on a keypad. The chances for completing the robbery successfully depend on the amount of triggering scatters because the player can pick 5, 6 or 8 numbers on the keypad for 3, 4 or 5 triggering Badges, accordingly.

Most of RTG pokies have random jackpots. In reference to progressive jackpots, being random means they are hit without any prerequisite that needs to be met. The Minor and Major jackpots are accumulated gradually in each specific online casino and can be won after any spin in normal game. Every bet qualifies but the long-run probabilities of winning increase as a bet amount gets higher.

Cash Bandits is a 5-reel 25-payline pokie with two local progressive jackpots, Minor and Major. The available bonus features are a wild, a scatter and plentiful free spins that are preceded by a short mini game which determines the number of free spins and multiplier (90 FS’s at x12 at max).