Bank on it Pokie 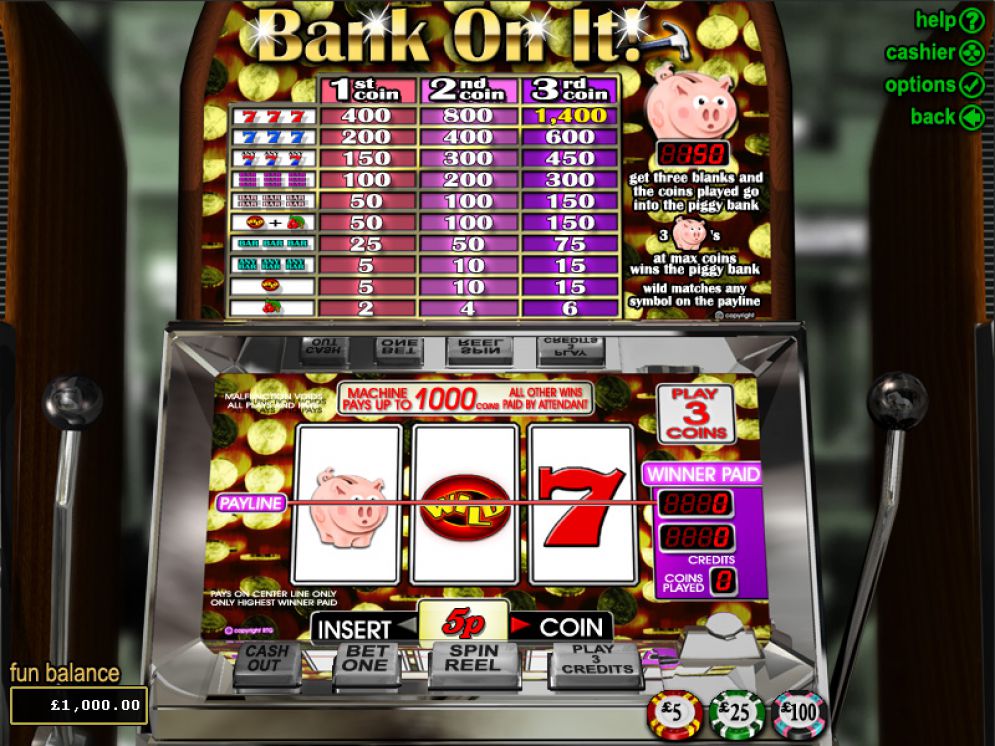 Bank on it Pokie Review

Bank On It is a classic 3-reel 1-payline slot that will be appreciated by all fans of retro slot machines. It has a Vegas-style gameplay and lots of classic symbols, which were widely used in the authentic land-based machines decades ago. It has an astonishing feature that enables you to put money into the piggy bank and then win the entire sum on hitting a specific combination. Though simple and purely classic, the pokie also features a wild symbol. You have a clear incentive to bet three coins because of the increase in payback for full-coin play.

Bank On It is one of these classic games that have very simple rules and straightforward gaming process. You do not need to scrutinize an over-complicated paytable or do mental arithmetic to calculate your potential wins. The entire game is shown on the single screen. The small paytable consists of three colored columns according to the bet level and is shown above the reels. The bottom part of the pokie features a few metallic buttons and three casino chips to select a coin size.

There is only one, horizontal payline which runs across the center and winnings are based on how the symbols are arranged on this line after the reels have stopped. Sometimes, there are empty spaces on the line and symbols are partially visible on a reel. The interface is simple and it features pseudo-3D buttons like these used in land-based slot machines. There is a Spin Reel button for setting the columns in motion, a Bet One button for wagering one coin on the line and a Play 3 Credits button to wager three coins at once.

Beside the traditional three-of-a-kind combinations that consist of identical symbols, the pokie offers cash prizes for hitting any BARs and any Sevens on a payline. For example, hitting a 1-2-2 BAR combination, you will get 5 coins, and seeing two red and one blue seven will grant you 150 coins.

Cherries produce the least valuable combination yet they occur very often. Three cherries gathered along the line pay you 2 coins. Besides, there is also a “Wild + Cherry” combination, which awards 50 coins.

You will be rather surprised to learn this classic pokie contains a wild symbol. It matches any symbol on the payline, thus increasing your payouts. What’s more, it is able to complete combinations by itself, though the payouts it generates are fairly small. If you get three wilds along the payline, you will grab just 5 coins.

A piggy bank is an interesting addition to the classic arrangement of the game. To the right of the reels there is a piggy bank picture and a digital meter that shows zero at the beginning of the game session. If no symbols appear on the payline (the payline is entirely blank) after any spin, the money you have wagered is added to the piggy bank. The sum keeps on accumulating while you are playing and in case you get three piggy symbols across the line, you win the whole sum displayed on the piggy bank meter. Due to this bonus feature, this game online by RTG becomes remarkably attractive.

Why to bet three coins?

In Bank On It, payouts for the second coin are exactly twice those of one coin. For example, you get 25 and 50 coins for a single BAR when playing one or two coins, accordingly. The situation is almost the same with three coins but there is a slight difference. Payouts for the third coin are thrice as high as those of the first coin but except for a combination of three red 7s, which pays 400, 800 and 1400 coins for one, two and three coins, respectively. So there is a juicy 200-coin bonus that may be yours when playing full coins.

Bank On It is a classic three-reel slot with a single payline. It provides a Vegas-style online casino experience and features a Piggy Bank bonus that enables you to accumulate money gradually and then grab it in a lump sum. Bank On It has a wild symbol and a three-coin bonus for a combination of three red sevens that produce a 1400-coin win for three of a kind. The slot is available in two modes including a real-money play.