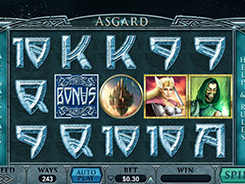 Asgard is a 5-reel pokie based on two major engines: 243 ways to win and Win Both Ways. Thematically, the pokie revolves around Norse mythology and Asgard, a magnificent sky kingdom inhabited by gods. Numerous exciting features are offered to the player and they are unlocked gradually as soon as the player triggers a bonus for a certain number of times. Some features include but not limited to an extra wild, 15 to 30 free games, wild multipliers and morphing symbols. The game fits well with the budget of low-rollers and is compatible with Android/iOS devices.

In Asgard, payouts stem from two basic systems that underpin the mathematical model of the game. First, there are 243 possible ways to win instead of paylines, implying that 3+ matching symbols must land in adjacent columns without regard to their positions on these columns. Second, combinations award in both directions, from left to right (as most games usually do) and right to left. Payouts on five-of-a-kind combos count from either side.

The pokie is decorated and designed with the theme in mind: fonts of UI writing, intricate Norse patterns at the backstage and symbols themselves amplify the mythological theme and create an authentic cultural reference to the Scandinavian folklore. The color palette is dark and gloomy with silver and black shades. The RTG development team made the game for low-betting punters because a spin bet is adjusted in a small range from $0.30 to $3. No other wager settings are put in place.

A square tile with sophisticated golden adornment and the word “Wild” is a substitution symbol. All wins double their nominal values when a wild takes part in combinations. Wilds also act as normal pics in the sense that they pay out by themselves when 3+ land adjacently. Three wilds, or greater, provide x75, x200 and x1000 payouts ($100 at max). Besides, the golden Wild plate is part of a Thunderbolt feature that may come into effect at any time in normal game and transform up to 5 reels into wild.

The longer a game session lasts, the more interesting the pokie becomes because there is a four-tiered feature that unfolds step by step in the course of the game. The feature is triggered by three BONUS icons. The player receives an award of x1 to x250 a total bet ($750 at max).

This multi-level feature is an exciting addition to the pokie. The player is urged to go on playing because free spin features on the third and fourth levels are able to make lots of money.

Asgard is a 5-reel pokie complete with 243 ways to win and win both ways models. Very low bet sizes ($3 max) make it a nice option for players on a budget. Features include a substitution symbol and four free spin modes, each carrying its unique bonuses and opportunities.