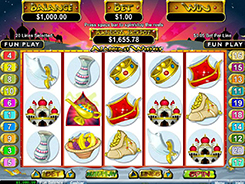 Aladdin’s Wishes is an RTG video pokie with 5 reels, 20 lines and a random progressive jackpot. Playing for real money, punters have the chance to win $1000 as the top prize, given the maximum bet is as low as $2 on a spin. Wild symbols are aimed at making the winnings more substantial because of their double multiplier. The pokie also has a small bonus game where instant cash or 25 free spins can be won. Funny, fast and tempting, the game is very likely to appeal to low-rollers, animated cartoon junkies and progressive jackpot buffs.

As the title suggests, the game is inspired by Aladdin’s adventures brought to life in Disney’s cartoon films. Silhouetted minarets and camels behind the reels add to the atmosphere of the pokie, while the elaborated fonts with curved lines reflect the Oriental theme. Matching pics form a payable combo in a traditional manner, from left to right, except scatters that pay in any place.

Character symbols are taken exactly from Aladdin, an animated television series aired in 1994–1995 in the US and beyond. Other symbols, which award frequently but not much, are different accessories and things such as a fruit basket with bananas, oranges and grapes (x100 for five of a kind), a gold crown (x200) and Aladdin’s sword (x250). The main characters (and villains) are the most profitable actors in the pokie: Monkey awards x500, Genie gives x1000 and Princess Jasmine wins x5000.

Stakes are very low. They begin at $0.25 and are increased in 25-cent steps to $2.50 per spin. Players can deactivate paylines and choose to bet on other than 25 lines. Max wins can now be easily calculated – they are $500 for five princesses and $100 for five genies. If betting less than $2.50, the said wins will be lower, too.

The smiling Aladdin substitutes for regular icons, assisting in the formation of winning combos. It cannot complete its own combos, mainly due to being limited to reels 2, 3 and 4. When a wild substitutes, it doubles the award for that combination. As a result, a ‘four Jasmines plus a wild’ combo potentially produces $1000 at max.

A magic lamp is another special symbol. Two of them pay out x2 the total bet. 3+ scattered magic lamps start a pick-to-win bonus feature on a new game screen. The player is presented with five lamps and is awarded with several picks equal to the number of triggering scatters. Four items hide credit prizes of x2, x5, x10, x25 or x100 a bet, while one magic lamp gives 25 free games, if picked. During free games, each combo is awarded at double value.

The progressive jackpot is winnable by every real-money punter and a bet size is not factored in. One may wager merely $0.25 and be still eligible to grab it. The progressive jackpot is local and its pool is stockpiled by users of a specific online casino. Winning it falls within the realm of luck – the player can actually become winner after any spin. The jackpot is called ‘random’ because no special combo is needed to hit it – the player just carries on spinning the reels as usual and relies on luck.

Aladdin’s Wishes is a fairy-tale inspired pokie with 5 reels, 20 win lines and a local progressive jackpot. It has three bonus extras: a wild symbol with a x2 multiplier, a bonus round with instant coin giveaways and 25 free games. In view of the small bet range ($0.25–$2.50), the game is ideal for low-rolling players.