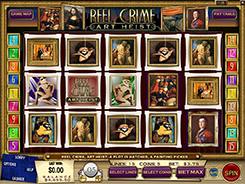 This multi-tiered five-reel pokie from Rival Gaming has 15 paylines and it welcomes everyone to the i-slot adventure during which the player is going to have a trip back in time to the capital city of France and join a team of two thieves as they plan to rob an art gallery in Paris. This is an ingenious pokie with a long bonus trail that the player moves along while spinning the reels. Having numerous exciting bonus rounds, the pokie is extremely rich in payouts, with the top one being $25,000.

Rival, a famous pokie provider, has released dozens of so called “i-slots” that have distinctive storylines, a plethora of bonuses and captivating gameplay. The pokie reviewed here features a Game Map that shows player’s current position and consists of the following levels:

At very beginning of the game, a persistent player advances from the first level “The Gallery” to a bonus round listed under paragraph 2 above, then the player moves to The Tools of the Trade normal game and so on. As one can see, this is a unique game arrangement and a revolutionary approach to pokie making that prevents the bettor from getting bored.

A bet ranges in size between 15 cents to $75, with the possibility to change a coin value ($0.01 to $1) and the number of active lines. Each regular and bonus symbol depicts a painting and the entire game board looks like a part of a museum in which these paintings are showcased. There are six normal paintings (they have white background) and four scatter paintings (they have purple background). Normal symbols award x8 to x500 when on a payline from left to right. There is a totally unique thing about the pokie: As the player moves to a new game level, a brand-new set of symbols emerge. The symbols described in this paragraph are applicable only to Level 1: The Gallery, and every subsequent level has its own symbols which are associated with the theme of that level.

The four scatter symbols depict some of the most iconic creations of the mankind including Munch’s The Scream and The Mona Lisa by Leonardo da Vinci. The four different scatters pay out up to x100 a total bet ($7500) when three identical masterpieces appear in any position. Mona Lisa is the only symbol that gives the player a reward (x2 the total bet) when two of them land.

Depending on the level the player is currently at, a bonus feature can take one of five forms:

Each time any of the five bonuses is complete, the player progresses on the game map in accordance with the list given above (The Gallery… Beach Or Bastille).

Scatter symbol and bonus round

This bonus does not move the player along the level trail. But this is a wonderful chance to grab some cash. When 3+ game logos land in any position, you will be presented with a grid that contains lots of boxes, each hiding a painting. Amongst these paintings there are four masterpieces and the player’s goal is to locate one. The more picks the player makes before finding a masterpiece, the more of the total prize is lost.

The Forger symbol is a wild multiplier. It substitutes for all regular pictures and doubles payouts when doing so. Besides, it is able to form combos independently. Two to five of them assembled on an active line pay out x10 to x5000. Thus, playing at the maximum stake, the player can win $25,000 for that combination.

This is a random bonus that can start at any time. There are many different Robin Hood rounds that can appear at each game level. The player is presented with 15 tiles, each revealing a video snapshot that shows the thieves doing dirty deeds at the museum. The player can end up the bonus with 400 to 1000 coins in the pocket.

Reel Crime: Art Heist is a true masterpiece in the world of pokies just like The Mona Lisa is unique in art. The pokie has a well-designed plot, dozens of symbols and numerous bonus features that alternate as the player moves further on the long Game Map. Bet sizes come between $0.15 and $75, and the maximum potential win amounts to $25,000.