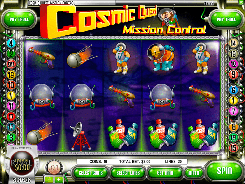 Cosmic Quest: Mission Control is a 5-reel pokie with a space exploration theme that is presented in a funny rather than serious way. Cosmic Quest has expanding wilds to literally skyrocket your wins, and a lavish free spin round. If this is not enough to ignite the player’s interest, the pokie has an arcade-style bonus game in which you are to shoot down asteroids. If you have tight budget, the pokie is for you since it has a comfortable minimum bet of just 20 cents.

The game design is made deliberately simple. It looks like an old game for a video game console that could produce low-definition graphics which were popular in arcades. Win animations will make you smile for a moment because they are drawn with a humorous undertone, for example, an X-rayed spaceman standing in a “fig leaf” posture or a surprised dog wearing a spacesuit.

Rival Gaming uses a time-proven pokie engine with 5 reels and 20 paylines. Matching symbols need to get arranged from the first reel and rightwards without interruption on a payline. But some feature symbols such as scatters are excluded from this rule because they can be in any position and still be considered as winning symbols.

A red rocket ready to blast off is a wild symbol with additional perks attached. During normal game, it serves as a normal substitute without any bonus extras. It also pays out by itself, should 2+ rockets hit an active line. And the rocket is the most profitable picture in the pokie, with five of them awarding 5000 coins ($12,500 if playing at the maximum wager).

An awkward monkey in a spacesuit unlocks a free bonus round with 10 spins if three of these space travelers occur in any position. Free spins are ordinary and have no additional multipliers. The only feature that adds fun to free spins is expanding wilds performed by the already familiar red space shuttle. Whenever a rocket stops in any position, a countdown from 10 begins and the rocket takes off, covering an entire reel it has stopped. After that, the player gets paid a normal win, if any.

This is a third-person space shooter in which the player has to move a spaceship with keyboard arrows and shoot the asteroids. Unlike 99% of bonus features that are based on a random-number generator only, thus the player has to rely on his good luck, the Asteroid Blasteroid feature is a skill-based bonus because it requires attention and agility.

The feature is triggered by three spacewomen in any position. On another screen, the player is given instructions to lead the rocket through an asteroid belt. The feature is over when the player uses three lives or escapes all the asteroids successfully. The objective is to fire at the asteroids or avoid collisions with them. Each asteroid that the player has blasted gives 200 to 800 coins depending on its size. The feature lasts for approximately 30-45 seconds and once it ends, the total amount of accumulated coins is awarded as a bonus prize.

Cosmic Quest is a space-themed video pokie with 5 reels and 20 adjustable lines. It makes an impression of an obsolete game with pixelated images but if you continue playing, you will see that Cosmic Quest is not a poorly designed pokie at all. It has an expanding wild, 10 free spins per trigger and an arcade bonus feature with generous prizes. Mobile online casino gaming is also supported.