As the Reels Turn Pokie 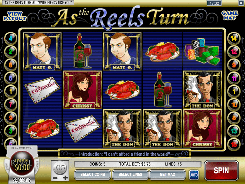 As the Reels Turn Pokie Review

This title from Rival Gaming made a big leap from being an ordinary 5-reel pokie like many others. What you are going to see when playing is an intricate story that evolves at the El Paradiso Casino. This is like a long journey through the fates of the heroes and villains, winners and losers, which continues across numerous scenes of the pokie. As the Reels Turn is a glaring example of a creatively designed pokie that is able to capture your attention from the very first spin. The top win here is $5000 but a great array of bonus features can win you way more.

The pokie has a clickable map that displays five game levels. The player starts the session at level 1 and gradually moves through the levels that get unlocked by hitting three Advance To Next Scene icons. The action takes place at a casino. Matt G., the casino owner, gives you an assignment to solve a mystery. Each of the five game levels is preceded by a flash video in which you get insight into the intricacies of what’s going on at the casino. As the Reels Turn is the first episode of the trilogy released by Rival Gaming, and is certainly one of the best pokies ever rolled out by that prominent vendor.

The pokie has 15 selectable paylines that run across the five reels. Bet options are fairly ordinary and enable the player to place a total bet of $0.15 to $75 per spin. You will see the symbols that reflect the dynamic story, including a wine bottle and glass, a boiled lobster and a Confidential envelope (each paying x100 for five of a kind), Chrissy, Matt and The Don (each paying x300 for five) and two jackpot icons, El Paradiso and piles of money and chips (each awarding x1000 or $5000 at the maximum stake).

There are also four feature symbols that add diversity and trigger a certain bonus feature to be described below. Interestingly, the pokie has no wild symbol but its absence does not compromise player’s expectations.

A pop-eyed fish named Ivan is the first scatter symbol that pays in any position. Should 3+ of them appear in any place, the player:

A seal-shaped Bonus symbol is the second scatter. And it is also counted in any position. Once 3+ of them land, the player is awarded x1, x2 or x50 the total bet ($3750) and proceeds to a bonus feature. Casino chip forgers worked hard to craft fake chips but the casino owner, Matt, tries to be proactive and spot the fakes before it is too late. The player’s objective in the bonus round is to find as many authentic chips as possible. You will see over a dozen chips on the table and your task is to click on them. Each original chip brings you a coin award but clicking on a copycat ends the feature.

Locate 3+ Tommy Wong pictures anywhere on the reels and trigger a bonus feature. You will find yourself in a premise where there are the silhouetted people. The aim of the feature is to guess whether Tommy, who is an impersonator, is going to perform as Stevie Wonder, Michael Jackson, Dolly Parton or Elvis. If your selection is correct, you receive a bonus prize and return to the reels.

Consult the game map at times to track your current progress. Moving to the next level is possible upon hitting three self-explanatory icons that read “Advance to Next Scene”. This gives rise to the following consequences:

Each subsequent level of the pokie represents new bonuses that correspond to new turns of the story. This may be a bit tricky to understand if you have never played islots produced by Rival Gaming. If so, you have a wonderful chance to go to an online casino and play As the Reels Turn for real money.

This is a funny, picturesque and arresting 5-reel pokie with numerous bonuses and five-level gameplay. Bonuses include free spins with a x3 multipliers and numerous pick-and-win bonus rounds woven into the story to form a perfect whole. As the Reels Turn is an excellent choice for most categories of online casino players and is available on most mobile devices.