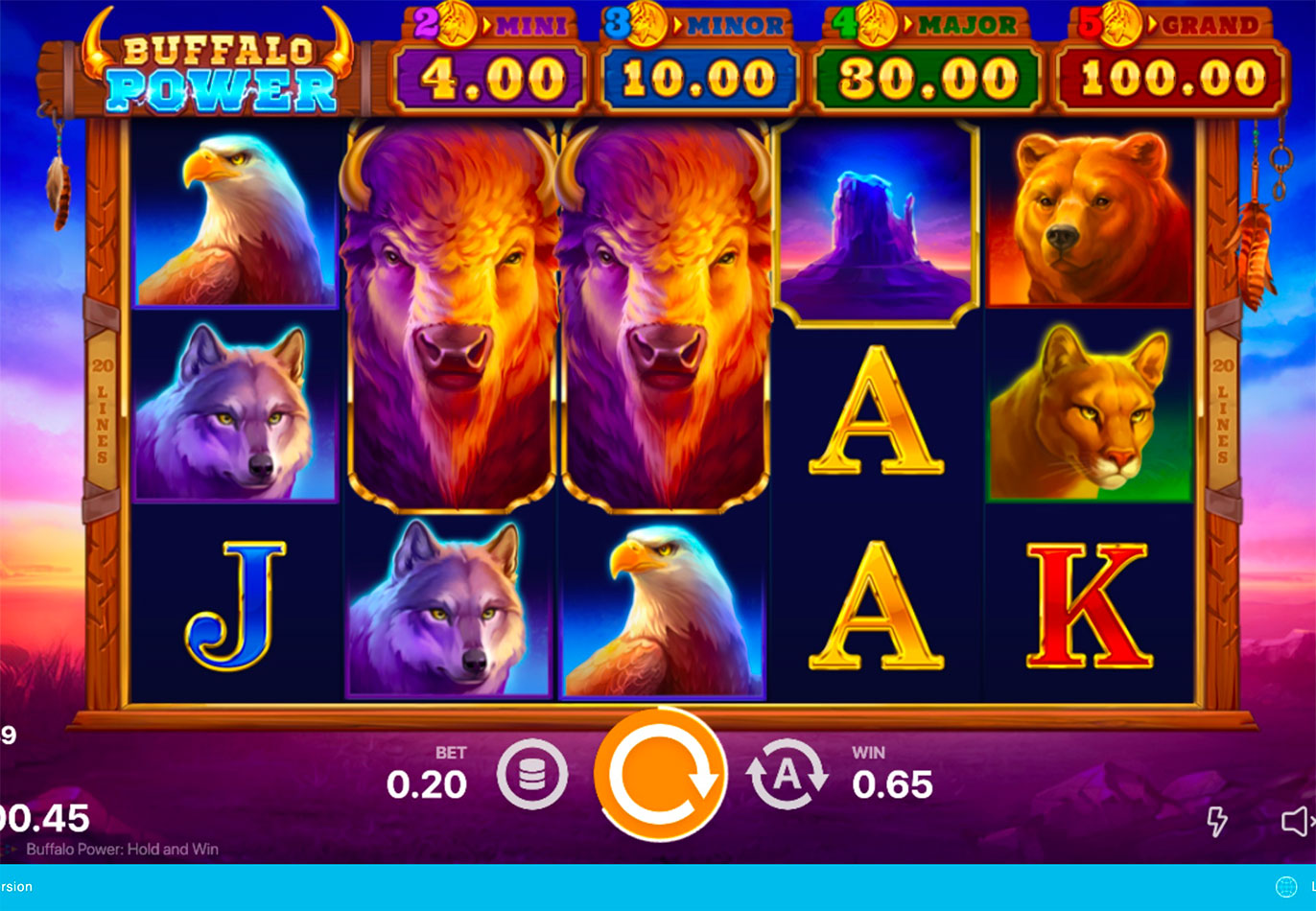 The game takes you to the U.S. Grand Canyon that is famous for its natural grandeur and wildlife which is quite unlike many other geographical areas in the world. Equipped with a 5×3 field with 20 fixed lines, the pokie machine has several useful features including stacked wilds, wild multiplier, free spins and bonus symbols. Fixed jackpots in Buffalo Power: Hold and Win are the most appealing part of the pokie as they can bank on hitting AU$50,000 wagering the maximum stake. Playing for real money is the only pre-requisite for big wins so create an account at the best online casino, bet Australian dollars or bitcoin and enjoy the abundance of world’s deepest canyon.

AS many games from Playson, the pokie machine in question fails to stand out when it comes to graphics. All images and background picture looks a bit dated if only because the game was released in August 2020. However, the graphics and visual content have never been the strong suit to Playson. Their development team mainly direct their efforts on features, which are really wonderful in the reviewed pokie machine, let alone four fixed jackpots.

Buffalo Power utilizes an innovative Hold and Win mechanics that allows for reaping multiple cash values that appear on the reels with each spin in a bonus game. This provides an engaging online casino experience and opens up opportunities for carrying x5000 the total bet. Players from Australia are readily accepted to play the pokie machine for real money.

The payline chart shows 20 fixed lines that are constantly enabled. Betting is configured by clicking a Coins button under the reels. The options offered to a player are numerous, starting at AU$0.20 and reaching the maximum of AU$100 per spin. From there, a line bet falls inside the limits of AU$0.01 and AU$5. Bitcoin casino visitors will be offered other monetary limits.

Every spin can generate a win due to regular and bonus symbols. Regular symbols must appear on paylines from leftmost and count at least three identical symbols. Payouts are different in size, depending on the symbols that are part of a combination. Low-ranked icons are J, Q, K and A, which hit x5 to x50 for three to five of a kind.

Animal symbols are treated as high-ranked because they provide more generous payouts but occur more rarely in proper positions. The best rewards for each symbol are as follows: x100 (wolves), x150 (bald eagles), x200 (mountain lions) and x250 (bears). Playing with the best possible bet in an online casino, the max prize here can amount to AU$1250 for five bears landing on a payline.

A mighty invincible buffalo is a wild symbol that carries out a few functions in the pokie machine. First off, it substitutes for regular pics, like a joker card does. Due to this, an online casino player can enhance the available combos or create new ones that would otherwise be lost without wilds.

Wild buffalos are stacked and can hold more than one cell at a time. Certainly, having two or three wilds on a reel enhances player’s chances to win a decent cash prize. Additionally, wilds are paying symbols by themselves. When three or more buffalo’s heads appear on a payline, a players gets AU$0.15 to AU$1250 according to the initial bet made on desktop or in a mobile casino.

A lonely cliff lit with sunset light counts in any position as it is a scatter. It appears in main game only and grants 8 free spins if at least 3 cliffs land anywhere. A free spin mode is more profitable than base game for at least two reasons: it is absolutely free and there is a stacked wild buffalo that, in contrast with the base game, pays out twice as much when part of a combination.

With that said, hitting a wild symbol inside any payline will increase the win by x2, for example, four bears plus a wild symbol will award AU$2500 instead of AU$1250 in a base mode. Sadly though, scatters cannot pay out directly by themselves.

This is certainly the climax of this pokie machine and the most sought-after stage of the game. Players can see yellow fireballs carrying certain cash values on them (up to x10 the total bet) and occurring during the base mode eventually. These are bonus symbols that trigger a jackpot feature, once at least 6 bonus symbols hit any cell on the screen.

The bonus feature is played with bonus symbols and Power symbols depicting a golden coin with mustang’s head. Three respins are presented at the beginning of the feature. With each respin, the previously hit symbols stick on the reels, thus accumulating the cash prizes indicated on them. To win any of the four jackpots, an online casino player needs to get at least two Golden Coin pics in any position. The available jackpots up for grabs are the following:

Those jackpots are non-progressive and always keep their values linked to a bet size. This opens up potential for low rollers to hit any of the four jackpots even at the minimum bet.

If the entire screen gets covered by Bonus/Power symbols, all wins will be multiplied by x2. When a Power or Fireball symbols appears during the feature, the respin counter resets to 3, thus prolonging the mini round and enhancing the likelihood of jackpot wins.

Buffalo Power: Hold and Win is a 5-reel 20-line pokie machine with four progressive jackpots, the higher of which is equal to x5000 times the total bet. Bet sizes are flexible enough, varying between AU$0.20 and AU$100 per spin. Online casino features include a stacked wild and a wild multiplier of x2 during non-retriggerable free spins.