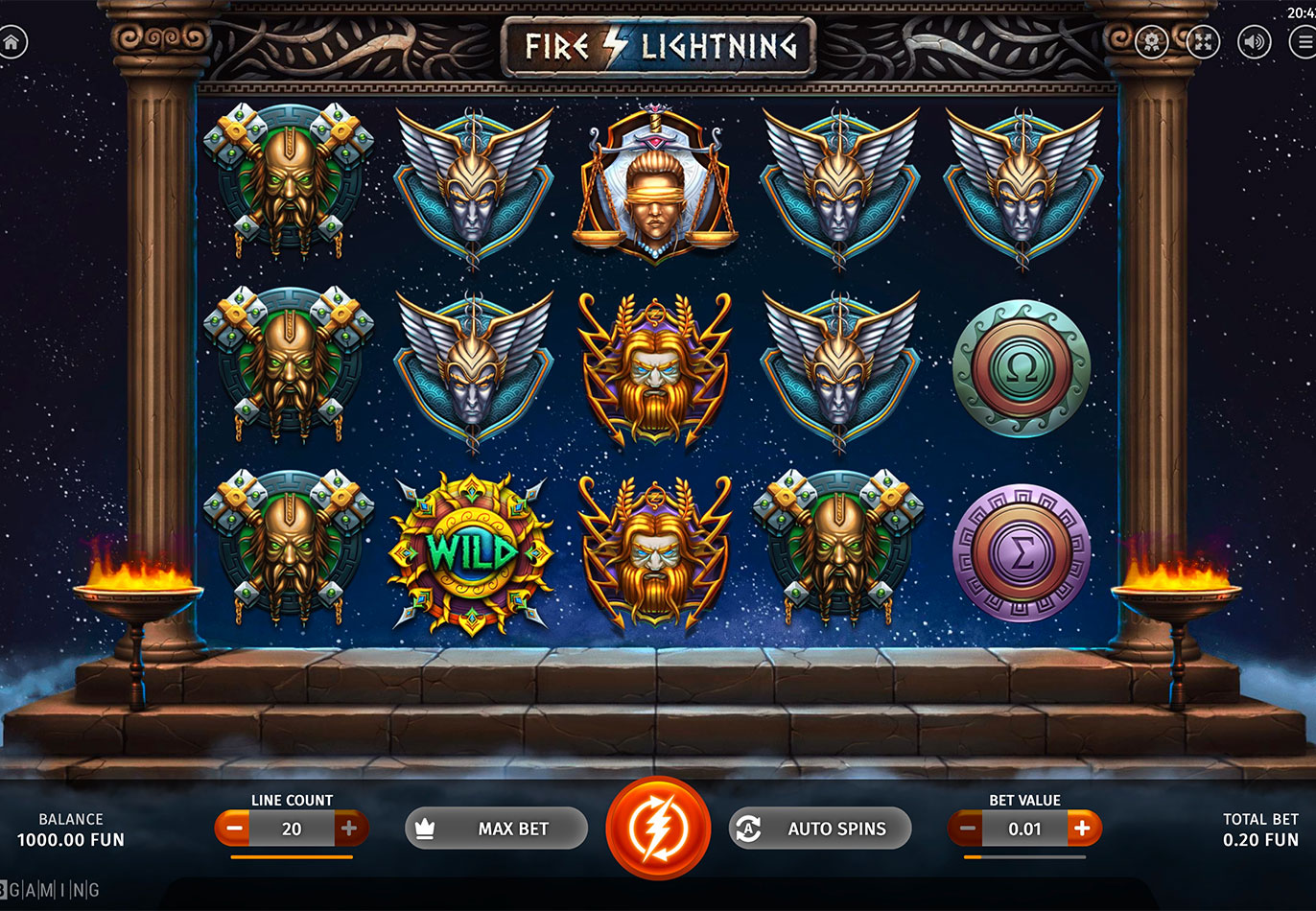 Greek mythology has been a plentiful source of inspiration for many book writers, film makers and, more recently, pokie developers. BGaming, which emerged on the market in 2017, presents a 5-reel 20-line pokie machine devoted to Ancient Greek mythology. Taken all round, the online casino game lacks that kind of eye-popping imagery or mind-blowing bonus features that would add thousands of dollars to player’s pocket fast. In fact, Fire Lightning is a fairly lean pokie when it comes to bonus features since the only special additions to the normal gameplay are a wild, scatter and free spins with sticky wilds. Players from Australia who like low-variance pokie machines are recommended to try Fire Lightning as it yields low and medium-sized winning combos every so often. The game is also available in some mobile casinos as well.

Gods and other game symbols are encased between classic stone pillars and are shown against the barely seeable starry sky at the background. Fire is burning in elegant bowls near the pillars and the entire picture looks somewhat eerie and mystic. This enigmatic feeling is supported by sound effects and music that add an element of suspense to the gameplay in an online casino.

BGaming takes pride in releasing Provably Fair pokies. This functionality is still active in regular gambling sites, not only in bitcoin casinos. To check authenticity and accuracy of a game spin, a player should enter a client seed and then wait for a final result that is generated at the end of the spin.

As an auxiliary tool used by some players, the video pokie has an autoplay feature set enabling one to select the number of automatic rounds (10 to 1000) and utilize one of Stop Autospin options (terminate spinning if a single win exceeds…, if cash balance decreases by…, etc.).

The lines in the online casino game are not fixed, meaning a player may use Line Count controls to increase or reduce the number of active lines to wager on. A line bet amount can be set using Bet Value controls under the reels. it enables one to pick several options such as AU$0.01, AU$0.05, AU$0.1, AU$0.5, AU$1, AU$2 and AU$2.5. A spin bet is thus between one cent and AU$50. Clicking Max Bet will set all bet parameters to their max values and the reels will not be spun automatically after that.

A player will face many low-valued symbols in the pokie machine, which are represented by shields with Greek letters at the center: a purple Epsilon shield, a blue omega shield, etc. These symbols pay out x10 to x100 if three or more of them match up on an active line.

Five god symbols are more lucrative as they award bigger wins, at x20 to x400 for three, four or five of a kind. Ultimately, there is a Fire Lightning logo that pays out the best, at x1000 for five of a kind. That said, the top three awards that ordinary icons are able to produce are AU$2500, AU$1250 and AU$1000 if the pokie is played for real money. All symbols award from left to right on consecutive reels.

A golden disc resembling the Sun is a wild symbol. From the one hand, it is a very profitable element of the pokie machine as it replaces ordinary icons and increases winning chances. From the other hand, it has a few limitations imposed to it. One of major drawbacks is that the wild cannot pay out independently of other pics; instead, it can be part of other combinations and contribute to lots of winnings.

A symbol with a “Bonus” sign is a scatter that pays out in any place on the display. Get 3+ of these profitable pics and be awarded x2, x10 or x100 the total bet. The max prize is equivalent to AU$5000 at the highest bet.

Three, four or five scatter symbols activate a bonus round of 10 free spins. Occurrence of 3+ scatters during the feature will give a new set of free spins with no limit to their total number. Anyway, the feature runs with the same bet settings and win multiplier (x1) as the base game. The only extra functionality added to free spins is a frozen wild. Normal wilds appear only on reels 2, 3 and 4 during free spins.

Should a wild fall to any position, it will get frozen in its position until the end of free spins to enhance the winning chances. This can ultimately lead to massive wins.

Each win in the main game can be increased by clicking the Gamble button. The objective of the gamble round is to guess correctly the color or suit of a facedown card. Making a correct pick increases the initial winning by x2 (color) or x4 (suit). An online casino player may collect the win or risk to play the feature again. The feature actually has a standard configuration found in many other pokie machines out there.

The pokie machine reviewed above is inspired by Greek mythology and features a 5×3 scheme with 20 adjustable paylines. Features include a wild symbol, scatter, free spins and frozen wilds during free spins. Top three prizes are AU$5000, AU$2500 and AU$1250.