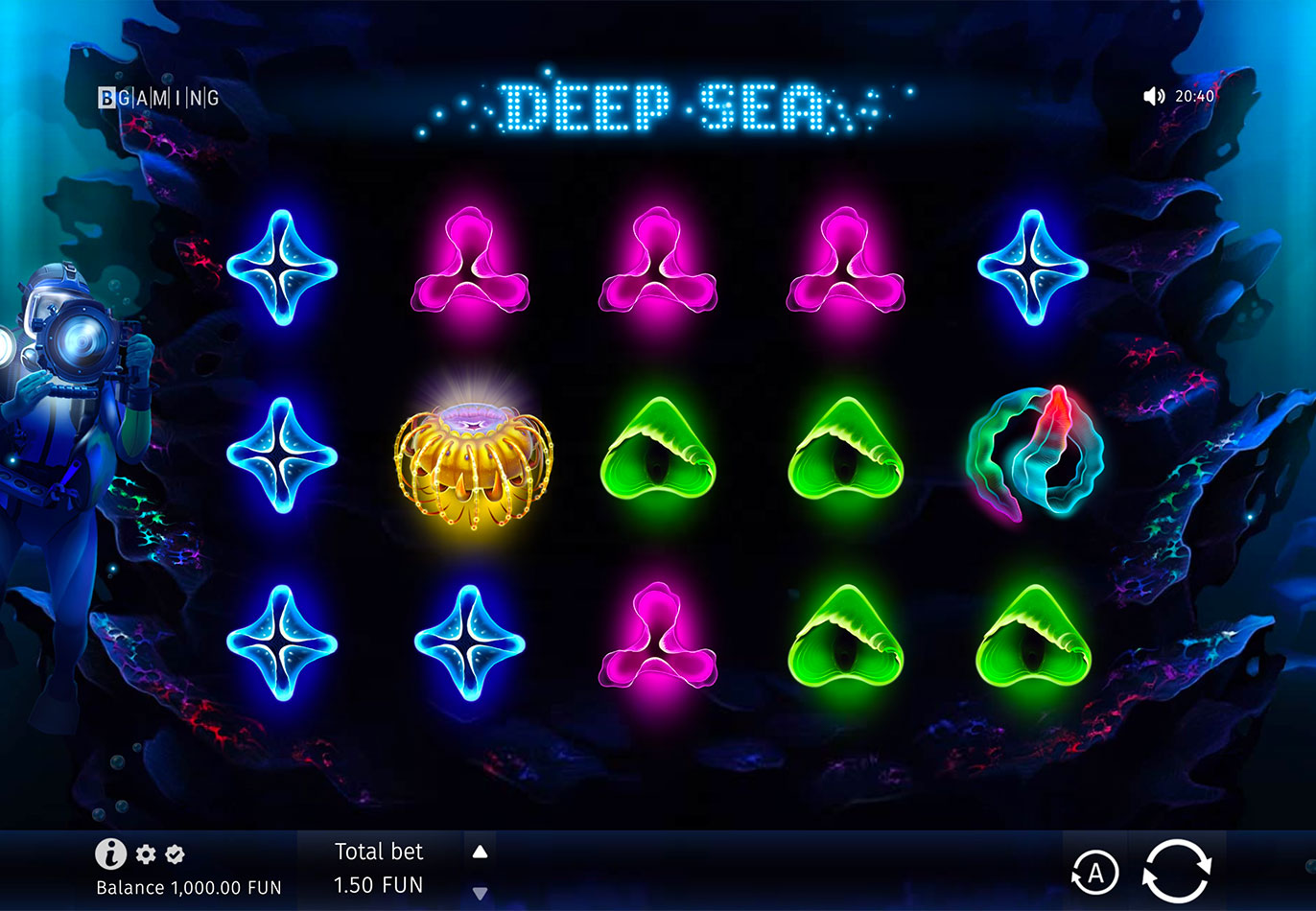 This time, BGaming decided to explore a deeper part of an ocean with their 5-reel 15-line pokie machine. As players would see themselves, the game makes a dual impression: it has a pleasant visual design with detailed symbols and slick animations. But from the other hand, its bonus features are not numerous. All it can offer to an online casino player from Australia is a wild symbol, scatter, free spins and a random fall of wilds during the bonus mode. Whether this is enough or not, it somewhat depends on player’s expectations but one thing is sure: the developer utilizes a rarely used pokie theme and offers lavish payouts due to additional wild symbols.

Get ready to plunge deep into an abyss where only the most endurable organisms are roaming the area. The deep sea is almost uncharted but AU players have a grand opportunity to make their mark on the seafloor. Symbols are arranged into five columns and three rows, all wavering slightly as if influenced by underwater flows. The animated cave with some small luminous creatures, a scuba diver capturing what’s going on the reels and other exciting visual elements add fun and increase entertainment value of the pokie machine.

As many other five-reelers, this one has a standard autoplay tool, speed adjustment feature, settings and other traditional extras that are found in most high-quality pokies.

Actually, betting options are determined by the online casino you are going to play at. A test Deep Sea pokie machine used for this review suggests betting AU$0.15 to AU$15 per spin, with all lines in play, though other gambling sites may set other acceptable bet sizes. In bitcoin casinos, the specified bet range will be equivalent to bitcoin units.

Anyway, there are only eight non-feature symbols in the game. At the lower part of the pay chart, a player can see some irradiant sea creatures that resemble card suits: spades, diamonds, clubs and hearts. These award x5 to x50 for 3 to 5 of a kind. Winnings are evaluated as normal, from left to right.

More complex creatures pay out higher awards. These are a glowing warm (x100), a weird jelly fish (x150), some yellow deep-sea creature (x230) and a green starfish-like animal (x300). Since the max bet is AU$15 per spin, the max award that non-feature icons can generate is AU$300, which is quite low compared to the competition. However, players should know that the pokie machine falls under the category of low-variance online casino games in which payouts come very often but tend to be on the small side.

A wild icon (Capture) gives the player a higher chance of winning by replacing unwanted symbols with the ones lacking for a winning combination. Wilds also award a cash prize of x350 but they do so only when five of these symbols hit a payline. Playing for real money and betting max, an online casino user will reap AU$350 for the five-wild combo.

Subsea cameras are scatters that appear here and there and count in any position. It does not matter whether they land along a payline or somewhere else. Getting 3+ cameras in any part of the screen awards 10, 12 or 15 free spins.

At that point, the screen moves down and the player dives yet deeper into the black abyss of the ocean. Free spins run as they usually do in other online casino games and come at no cost to the player. Though no win multipliers are effective during this feature, there is a nice extra attached to that bonus mode.

Free spins would be dull and bog-standard if not for additional wilds. During free spins, a submersible camera (scatter) changes to an angler fish. To launch the Additional Wilds extra, a player needs to catch 3 angler fish. Every time the scatter lands, it adds to the counter until reaching 3, at which point the pokie scene moves yet deeper and adds 10 wild symbols onto the spinning reels.

Important note: wilds are not thrown directly onto the screen after the reels have ceased moving. They are just added to the quickly spinning reels, building into the existing sequence of symbols and once stopped, the increased number of wilds on the strips improve opportunities of seeing one or more wild icons on the screen.

New wilds can be supplemented again under the same conditions as explained above. Overall, availability of this unstinting bonus feature upgrades the pokie’s appeal while remaining an affordable pokie machine that every Australian player can enjoy.

Deep Sea is a 5×3 mobile-friendly pokie machine which is developed by BGaming and features an underwater theme. It has a wild symbol, scatter and retriggerable free rounds that are augmented with 10 additional wilds distributed randomly on reel strips. The game is published in many trustworthy online and bitcoin casinos. Being a clear-cut example of a low-variant game, Deep Sea has the max award of AU$350 only during the base play.