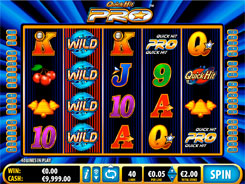 Quick Hit Pro is a 5-reel pokie with 40 paylines and classic symbols. The key aspect of the pokie that attracts thousands of casino visitors is massive jackpots and high-rolling bets. Bally have released five pokies of the Quick Hit series, each having their own unique features: Platinum, Black Gold, Las Vegas, Cash Wheel and Pro. The game reviewed here was the latest addition to the series that still has an enviable popularity with casino visitors and is in the most played list of many online casinos. All the five Quick Hit pokies have a classic style and strong modern touch with regard to bonus features and graphics. The most alluring about the reviewed game is the chance to win $600,000 on a single spin! This colossal win is definitely an excellent incentive for you to try the pokie at our recommended online casinos.

Quick Hit Pro is played over a 5×4 layout with stacked wilds that increase your winning prospects. In terms of symbols, the pokie is purely classic because the set of symbols consists of cherries, bells and playing card icons 9–A. A line bet is only one single adjustable bet option that allows you to choose between $0.01 and $10. The number of lines is always 40. Therefore, a total bet ranges between $0.40 and $400 per spin.

The paytable shows uniformity in winning values. Nines, tens, jacks and queens award up to $500. Kings and aces grant you up to $1000 for five of a kind. The same integrity in payouts refers to other symbols: cherries, bells and pokie logotypes give away $2500 if five of the same pictures are hit. Combinations pay left to right and only for three of a kind or greater. This is a mid- to high-variant pokie that can provide you with massive wins. Ordinarily, you will need to wait a while until you grab a huge amount of cash. Just make sure you have a sufficient bankroll to finally reach a winning streak.

How to win big in Quick Hit Pro

The pokie has a Quick Hit icon that belongs to scatters because it is counted in any position. Exactly the same symbol is used in other slots of the series as a jackpot maker. The symbol begins paying out if at least four of them stop in any position, and wins for these symbols are multiplied by the total stake. More or less impressive money is awarded for 8 Quick Hit logos ($20,000), 9 logos ($100,000), 10 logos ($300,000) and 11+ logos ($600,000). Sure these symbols are rare, especially in quantities required for scooping the life-changing sums of money. However, availability of so big prizes takes your online casino experience to the next level because the top jackpot in this pokie is greater than many progressive jackpots.

A wild symbol in the pokie stands in for regular icons and helps them form combinations. The wilds have some unique properties that make them critically important in some gaming situations:

Do you feel reminded of the word “prochinko”? Hint: Recall the most popular game in Japan that is reminiscent of pinball. Gambling in Japan is banned by law, with some exceptions like betting on sports events. There are no land-based casinos in that country but gamblers have a legally recognized entertainment called “pachinko”, an arcade game played with metal balls. The player inserts the balls into a pachinko machine, the ball is released into the playing field, bounces against obstacles and finally drops into a catcher that will determine a prize.

Bally named the free spins feature “Prochinko” because you have to collect metal balls during the feature and then shoot them in a pachinko game. To enter the bonus, three or more of special Free Games symbols have to land on reels 2, 3 and 4 at a time. You are awarded 15 non-retriggerable free games, during which a Ball symbol can appear in any position. If one or more balls have been collected by the end of free spins, a prochinko bonus begins. Note that the number of balls collected cannot exceed 20. On a new screen you will see a pachinko machine and should click on the plunger to fire the balls onto the screen. Each of the balls awards a random prize of x1 to x5 the total bet.

Quick Hit Pro is a perfect game for high-rollers with the opportunity to win three grand jackpots worth $600k, $300k and $100k, which are primary reasons of why gamblers are eager to try this pokie. The game has a Japanese-style Prochinko bonus that follows after 15 free spins.