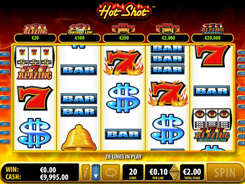 Hot Shot from Bally is a six-in-one pokie with lots of fun and a plethora of retro-style action that true connoisseurs of classic pokies will certainly give the highest mark to. When you open the pokie and begin spinning, you will be greatly amazed with the concept that Bally integrated into their famous game: The main full 5-reel game has five side games that are almost accurate replicas of famous 3-reel pokies. Sounds a bit confusing? In fact, this unique solution is very elegant and easy-to-understand. Read further below to get insight into the possibilities and performance of this enticing pokie.

First up: On the face of it the pokie is a bog standard classic game with familiar symbols and a generic interface. All of these sevens, bar variants and dollar signs increase your assurance that you are about to play just another common-and-garden pokie. But this is flat-out wrong. Take a look at the top of each reel. Above the first reel is the Blazing 777 logotype, above the second reel is the Diamond Line 777 logotype, then go Double 777 for reel 3, Triple 777 for reel 4 and Blazing 777 Seven Times Pay for reel 5. Beside each of the five logotypes, there are sums of money that (you can try that yourself) change in size when you reduce or increase a bet. These five sums indicate five available jackpots, which are won in the course of bonus mini games.

Other handy settings that are displayed on the user interface include the Max Bet button and the Autospin feature to maximize your comfort and enjoyment when playing online.

The five jackpots are not progressive, i.e. they are not accumulated every time players make bets. But these fixed jackpots will inevitably draw your attention if you like progressive pokies, because the jackpots are really huge. Their amounts are in proportion to the total bet per game round:

How to get the chance of winning these alluring, life-changing money? The answer is you need to enter a bonus mini game first and then hit proper symbols.

The slot has 20 paylines and the maximum bet of $400 per spin. This must catch the interest of high rollers because the developers of today rarely delight players with high-dollar pokies and inflated jackpot sizes. Players on a budget will also find the game affordable because the minimum stake is as low as $0.20. Winning combos complete from left to right when at least three like symbols fall on an active payline. Regular pictures include all-time favorite BAR variations, dollar signs, bells and burning sevens. During a normal game, the maximum prize is $10,000 for hitting five sevens. Other awards are also generous but your aim is to enter bonus games where you can win a way better prizes.

The pokie has five different scatters, each allotted to a specific reel. When three or more scatters appear in any position of their respective reels, the mini game bonus is awarded that runs in a very unusual way. Each scatter transforms into a functional miniature model of a 3-reel pokie. Starting with reel 1 of the principal reel set, each game-in-game scatter will spin once and winning combos are on the center payline only. If you manage to get five scatters on the reels, you are awarded five mini bonus rounds.

Each game-in-game scatter has its own symbols and payouts. When a jackpot round starts, a related paytable appears on the screen automatically for easy tracking of your wins. For example, the Diamond Line 777 reel set awards x1 to x50 times the total bet, with the jackpot combination consisting of four sevens arranged in a diamond-shaped formation. The Blazing 777 Seven Times Pay scatter is located on the fifth reel only, so this is the hardest to land symbol but only in that bonus mode do you have the chance to scoop the 4-million dollar jackpot that will be granted to you immediately on seeing three Blazing 777 logos in a diamond-shaped formation. If 1 or 2 of these logo icons appear on the central payline, you get a multiplier of x7 or x49.

Hot Shot from Bally is a bold fusion of six classic games under one pokie title. The innovative game-in-game concept where each of five scatters triggers its assigned bonus game enables you to win enormous jackpots up to $4M and leave victorious. Sad to say, the pokie has no free spins and wild symbols; however, availability of the whopping jackpots makes up the shortfall and attracts thousands of players who like the thrill of getting considerable winnings. The pokie is easy to play online and can be very beneficial for users who are placing higher bets.