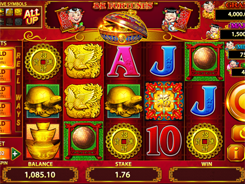 Rare event to see Bally producing a pokie with four jackpots, the maximum being $200,000. The jackpots are not progressive in the conventional sense but they do increase in size with a bet value. This is an Asian-themed game featuring very flexible wagering opportunities, a wild symbol and lucrative free spins where low-paying symbols are removed from the reels, leaving room for only big payers. 88 Fortunes utilizes a well-known 243 ways to win model whereby winning combos pay from left to right on adjacent reels, regardless of their positions on the involved reels. This no-payline approach maximizes the winning potential, but on the negative side, it reduces payouts on every single combination.

The pokie is about the things that are commonly associated with Asia and luck. Needless to say, the pokie’s name itself alludes to number 88 that is considered in China to bring luck and fortune. The set of symbols include traditional playing cards 9 to A and a couple of themed icons such as silver ingots, a turtle, a ship, an ornamented jade piece of jewelry and a golden coin. Whenever three or more of the same pictures appear on adjacent reels, you get an award as per the paytable.

The amount of credits you put into play has a strong impact on your total bet amount and the overall gameplay. There are only five options in this regard: 8, 18, 38, 68 and 88 credits. To make a bet more suitable to the needs of low-rollers, high-rollers and everyone in-between, the pokie has an adjustable credit value (or Bet Per Spin as it is known in this pokie) that ranges from $0.01 to $1. If you are here to win the biggest of the four jackpots, you are recommended to wager 88 credits or $0.88 to $88 per spin. If jackpots are not really on your radar, select a smaller bet size, for example, $0.08 per spin, which is the minimum acceptable bet in the pokie. Continue reading to learn how to qualify for the jackpots.

A Fu Bat symbol is a wild. In Chinese, the “Fu” hieroglyph is a common symbol of good luck. Besides, “Fu” is pronounced almost the same as the word for bat. Accordingly, bats are believed to bring good fortune, too. This auspicious symbol foreshadows good changes in your bankroll because it substitutes for all other icons and may award an available jackpot, unless they are inactive. There’s a positional limitation to the wild: It appears on the second, third and fourth reels only.

A golden gong suspended on a red frame on green background is a scatter and the highest-paying symbol here. Three of them, or greater, award up to $4400 and trigger a free spin feature that is the shortest road to riches in the pokie because the jackpots, though undoubtedly big, are certainly not easy to land.

For any number of scatters in the base game, you get exactly 10 generous free spins that are a far cry from what you are used to see in other pokies. You get the same reels and the same bet size as in base game but all playing cards (9, 10 … Ace) are not present on the board during free spins. This means that only themed, high-valued icons are going to complete combinations during the feature.

How to win a jackpot

Note that the four jackpots available in the pokie are not progressive, they have fixed values. Besides, they are locked by default, unless you bet a required number of credits to unlock them. First things first. The pokie features 4 jackpots: Mini, Minor, Major and Grand. When you change a credit value, they alter, too, because they are linked to a bet size. Mini is $2000 at max, Minor is $3750, Major is $75,000 and Grand is a massive $200,000. If you wager the minimum amount that still qualifies ($0.88), you will win $20, $37.5, $750 and $2000 respectively.

Playing 8 credits ($0.08 to $8), you do not qualify for any jackpot. You just spin away like any non-progressive pokie. Betting 18 credits ($0.18 to $18), you unlock the smaller jackpot, Mini. The three bigger jackpots get activated one by one on betting 38, 68 and 88 credits. That said, you need to bet the minimum of $0.88 per spin to be eligible for four jackpots.

When one or more wild symbols (Fu Bat) land in any position, a bonus feature can start. If you qualify for one jackpot (Mini), you receive it instantly. If you play 18 credits or higher, you will move to the second screen showing 12 coins. Then a match-to-win bonus starts. Your task here is to pick the coins that would reveal symbols of available jackpots. As soon as three matching symbols have been found, you receive an associated jackpot.

Bally have done a good job with 88 Fortunes. Its $200k jackpot is impressive even for a progressive pokie. The game features a wild that triggers a jackpot bonus round, a scatter and 10 free spins with only high symbols in play. A very good Asian-themed creation based on a 243 Ways format.