Queen of the Nile 2 Pokie 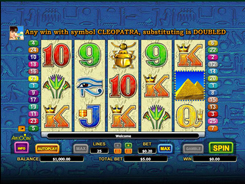 Queen of the Nile 2 Pokie Review

Classics never fade. Country music, pickup trucks, apple pie, Edgar Allan Poe. All of them are timeless classics that are always in style. The same refers to the Queen of the Nile pokie from Aristocrat. Its first original land-based version was released in 1997, the game captivated millions of casino visitors all over the globe and its online version reviewed below is still a very popular entertainment and an enduring piece of work from the Australian game developer. Queen of the Nile is basic in its nature – its features include no more than a wild, a scatter and free spins. There are no progressive jackpots and bonus games in the pokie but the chance to win over $20,000 on a single spin still catches the considerable attention of gamblers.

Queen of the Nile is steeped with an Egyptian theme, as the name implies. The design artwork focuses on simplicity and it lacks the refinement and sophistication of some modern pokies. On the solid brown backstage, there is a 5×3 game field with 20 paylines that are marked out with corresponding numbers on both sides of the reels. These 20 paylines are active by default as soon as you have loaded the game. But the pokie has “+” and “-“ buttons positioned on the left-hand side of the pokie controls – by using them, you can decrease the payline coverage to 15, 10, 5 and 1. Another option that changes a bet size is a “Bet Per Line”. Wagering all the 20 lines, the stake can be as high as $50 or as little as $0.40 per spin.

There are 11 regular and 2 feature symbols in the pokie. The regular images incorporate conventional playing cards from Ace down to Nines, and themed symbols, all designed to fit the Egyptian theme. There should be at least three of the same symbols aligned on a payline from the most left reel on. The only exceptions are Pharaoh’s Mask and Gold Ring that requires 2 of the same to pay out. Winnings on playing cards vary between x2 and x125. Themed symbols are Flowers (x250), Eye of Ra (x250), Scarab (x400), Ring (x750) and Pharaoh’s Mask (x750). To calculate the max winning for five like symbols, you need to multiply a related value (given in brackets above) by the maximum stake. Feature symbols, be it noted, pay much better than regular ones.

The Auto buttons stuck to the triangle Spin button are designed to turn on an autospin game mode and play the slot “hands free” for a selected number of rounds (1, 5, 10, 15, 20 or 25). By clicking a Settings cogwheel button, you can choose to mute sound effects and an ambient soundtrack. These additional settings are going to make you game more comfortable.

Cleopatra, a powerful queen of Egypt, is a wild symbol. Along with scatters, she is the most coveted picture on the screen that you can avail yourself of. Cleopatra will substitute for any regular symbol, thus completing a combination when needed. Another unmatched advantage of the wild is that it doubles normal payouts when substituting. For example, you have landed four Pharaohs plus one wild on the same payline. According to the paytable, five pharaohs award x750 but given the wild, the figure will be doubled to x1500. So you can pocket up to $3750 at the maximum bet. Furthermore, hitting two or more Cleopatra pictures, starting from the utmost left reel, awards x10 to x9000. This means five of these symbols produce the pokie’s largest jackpot prize of $22,500 on condition that the max wager has been placed on that winning spin.

The ultimate bonus game with big winnings activates when three or more pyramids land in any position, not necessarily on any given payline. 15 free games start without regard to whether you hit three, four or five scatters. In the course of free spins, the values of all winning combinations are trebled. This means that five wilds will bring you $67,500 during free spins if you are lucky to hit five Cleopatras. But there is more! Before the feature is under way, you earn an instant prize for three, four or five pyramids. Scatter wins are calculated from the total bet that is multiplied by x5, x20 or x400. You will earn $20,000 under the best of circumstances. Not too bad for the classic pokie like this. In sum, the feature can be retriggered by getting again 3+ scatters.

Queen of the Nile is one of the most popular Egyptian pokies that took gamblers by storm when it was released. It has pretty simple design and lots of themed symbols that blend nicely to depict the mysterious world of ancient Egypt. Features include a wild, scatter and 15 free games where over $67k can be won.