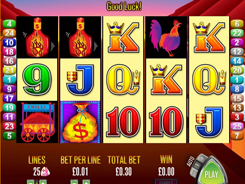 More Chilli is a Mexican-themed video slot released by Aristocrat back in 2007, and it was the first pokie in the gambling industry having a multi-reel feature. Many years passed since then but More Chilli is still a very popular mid-variance game with fast action, good wins of up to $4000 and an alluring free spin feature with a twist. During free spins the player collects chilli peppers and unlocks three or four sets of reels played simultaneously, which provides three or four times more winning combinations.

Playing the pokie online, you will feel as if in Mexico as the reels are full of red hot symbols such as a cart loaded with chilli peppers to the brim, a moustached Mexican guy offering you to treat yourself with more chilli and other themed icons. The slot was rolled out over 10 years ago so its visual design looks a little understated for today but in terms of features More Chilli is completely up to date.

The pokie has 25 paylines – this number is not fixed and the player is allowed to change the active lines in increments of 5 (5, 10, 15, 20 and 25). It’s hard to imagine why anyone should deactivate paylines, but anyway the pokie is flexible enough to let players wager even a penny per spin. A Bet per Line is the second bet option, which varies between $0.01 and $2. If playing with all lines switched on, the minimum and maximum stakes are $0.25 and $50 per spin.

Clicking the “+” button when 25 lines are indicated, you put into play a Plus Five bonus mode, which incurs a 20% increase in a bet size, therefore the max bet runs up to $60. The bonus mode shows no advantages in base game but you get three extra free spins in addition to their initial number. The side bet amount does not affect your winnings towards a higher value. For example, wagering the minimum bet of $0.25 (no bonus mode) or $0.30 (bonus mode is on), you will earn $1 in both cases if four Kings land on a payline. It’s completely up to you whether you would like to play normally or activate a bonus mode.

The pokie has 10 non-feature symbols that pay if 3+ land and 1 symbol (Chihuahua) that pays if 2+ land on a payline. The traditional playing cards Ace down to Nine award the least of all, x5 to x500 ($1000 at max). They are predominant pics in the pokie and will make your bankroll last in anticipation of big wins.

A Mexican man is a wild symbol that subs for all non-feature symbols. Along with being a substitute, it also pays out impressive prizes if two or more line up. Five wilds grant the pokie’s highest jackpot worth $4000 at max. The wild symbol unleashes its potential during free spins where you can grab a truly magnificent cash loot.

A yellow money bag with a red “$” acts as a scatter. Three of them gathered in any position activate the pokie’s most gainful feature. What’s more, at the end of any spin in base game, the feature can also be triggered randomly. This is where the bonus mode is really important as you are awarded 15 free spins if the Plus Five Extra format was on at the time of feature activation, and just 12 free spins if the bonus mode was off.

The feature starts as it usually does in other pokies – the reels set in motion at no cost for you. You will notice a Chilli Meter next to the reels – it is designed to count Chilli Pepper symbols that appear as free spins progress. At the very beginning of the feature, you have a normal 5×3 set of reels. And when 9 chillies are collected, you will see three sets of five reels on the same screen. All of them will spin simultaneously, generate different winning combinations and use the same bet size. Moreover, the fifth reel becomes entirely wild on all reel sets! If 14 chillies are collected, four sets of reels emerge and reels 4 and 5 on each set turn into wilds. This is like playing four separate pokies at the same time.

To capture the full benefits of the pokie, 30 chillies must be finally displayed on the Meter during free spins, at which point reels 3, 4 and 5 will be fully covered with wilds on all reel sets. As you will appreciate, so many chillies can be accumulated right before free spins expire but even one round with three wild reels may be more than sufficient to score a huge win.

More Chilli has a limited multi-reel format that was a revolutionary solution when the game was released 10+ years ago. Its oriental theme deploys on 5 reels and 25 paylines, and the max payout in the pokie is $4000 for five wilds.