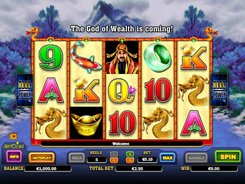 Choy Sun Doa is perhaps one of the most recognizable titles from Aristocrat and a very popular entertainment with gamblers. The god of the same name is the god of wealth in Chinese mythology, so all themed symbols relate to luck and fortune. The pokie is built on the Aristocrat’s branded Reel Power model that enables you to reduce the number of active reels if and when needed. The game has a flexible free spin pre-selection feature with as many as 5 free spin modes and varied wild multipliers up to x30.

An Australian vendor, Aristocrat are known for their love for oriental themes, which are in abundance in many of their games for land-based casinos and online casinos as well. Their pokies are widely popular because gamblers are given multiple options to adjust the gameplay to their needs, habits and budgets. The reviewed game takes you to some mountaneous location among the clouds, trees and calm ponds. The god of wealth who was believed to be able to transform stone into gold will help you find immense treasures if you make the best of the Reel Power engine.

Five-reel pokies normally have a 5×3 layout. The number of reels is constant and players cannot change it – and many of them actually have no idea why they should want to play, say, on 4 reels. The mechanic designed by Aristocrat has five disconnectable reels. Note that the central row that crosses the reels horizontally, from left to right, is always active, even on one single reel in play. When you play in a traditional way, on five reels, there are 15 operating symbol positions. If you switch reel 5 off, you reduce the number of symbol positions to 13. The same principle applies when you deactivate reels 4, 3 and 2. For all symbols, save for bonus scatters, winning combos pay out along any position on the activated reels and the central row only on deactivated reels.

What are the reasons that can ever drive you into switching off even one reel (reel 5)? There can be a couple of reasons, including tight budget, but the most obvious one is that you cut off five-of-a-kind combinations, except for a few that involve the central row. You can do this if after dozens of spins you have noticed that five identical symbols never occur or are very rare. That said, you can arrive at the conclusion that having the full reel set is a waste of money because the fifth reel is pretty much never involved in combinations. Removing more than one reel is allegedly not sound but you can make it as an experiment.

The minimum and maximum bets vary if you play different sets of reels:

In addition to Reel Power, the slot has 243 ways to win, which means a no-payline gameplay. Winning combos complete when three, or greater, of the same pictures, except for scatters that count in any position, pop up on adjacent reels from left to right.

The god of wealth is a wild symbol for this pokie. It has no powerful abilities to boost your winnings very high and its only skill is to substitute for all regular pictures, helping them form combinations. Sadly, the wild is reserved only for reels 2, 3 and 4.

A golden bullion in the shape of a crown is a special symbol. First, it awards up to 50 times the total bet, which makes it the most fruitful symbol. Second, it can appear anywhere on the board to pay out. Third, three or more scatters activate a selection feature where you can choose one of the five desired modes:

If you want to have the chance of huge wins, lean toward fewer free spins. On the other hand, if you prefer a low-risk game style, go for a greater number of free spins (15 or 20).

During any free spin mode, each Red Envelope symbol on the first or fifth reels grants you a random prize of up to 50 credits.

The Gamble button becomes clickable after a winning spin. Clicking it opens a new screen with standard gamble options. You can choose a card color or suit to double or quadruple the money won in the base game round.

Choy Sun Doa is a 243-ways pokie with the Reel Power mechanic and locked out reels. Free spins with five selectable options allow for choosing the most suitable number of spins and related wild multipliers. Bet sizes are designed for a wide audience of Australian gamblers.