Right and Wrong Bettors in Craps 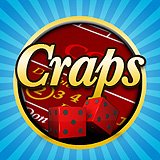 For the players that read craps articles and books will sometime come across the concept that certain players are referred to as “Right Bettors” and the other players are referred to as the “Wrong Bettors”. To the uninformed player with the language of craps this can be very confusing to understand. In this game right and wrong are not used in their common sense meanings.