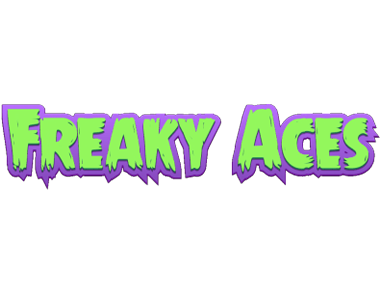 Join Freaky Aces to get a 200% welcome pack up to $400, to enjoy over 500 pokies and become member of a highly reliable online casino that awards its loyal customers with all kinds of bonus incentives. Freaky Aces is Australia-friendly and offers a variety of convenient payment channels. It also has an application that can be installed on a computer and run as an alternative to browser play. The most active players who place bets in pokies are encouraged to join pokie tournaments and vie to win a portion of a cash pool. The live casino aspect is awesome as Freaky Aces has a lineup of BetGames.tv products, which are renowned for their unconventional approach to gameplay presentation. The casino offers three communication channels such as live chat, email support and ticket-based online messages for registered users.

There are many easy ways for Australians to make a deposit to Freaky Aces. Methods include Visa, MasterCard, Neteller, Skrill, ecoPayz, ecoVouchers, Neosurf and paysafecard. Bitcoins cannot be transferred to or cashed out from the casino. All methods feature instant deposit times and no fees are applied by the casino.

Withdrawals are less numerous and they are actually the same as deposits except for MasterCard. Besides, players can get their funds from the online casino via bank transfer, not the easiest way in fact and it also comes with a charge of up to $40 per transaction. As for other withdrawal options, they are free of commissions. The min sum of a single transaction is $25, while the max limit is $10,000 per month. The casino reserves the right to lift the limit for VIP users. Terms and conditions do not contain any unexpected provisions or small print; everything is clear and transparent.

The casino performs equally well on desktop and mobile platforms and operating systems. It is possible to sign up, log in, place deposits, request withdrawals and, certainly, play on all major smartphones and tablets. The live chat and other support options also serve mobile users. Streamlined and well-designed, the mobile version provides a high level of interactivity, fun and ease-to-use. The perceived richness of HTML5 game content is further enhanced by a replete bonus program.

Players who have successfully signed up with Freaky Aces gain access to several hundreds of games released by 7 providers such as iSoftBet, Habanero, Lady Luck Games, Booming Games, BetConstruct, Red Tiger and MrSlotty. Pokies are published in a dedicated section which has a filtering option enabling AU users to show only games of the selected provider. Besides, there are a few sorting options to customize the way the pokie thumbnails are arranged.

In addition to basic wilds, scatters and free spins, games from iSoftBet have some exciting bonus features such as Cash Respins, Cascading Wins, non-progressive jackpots, Switching Symbols and random win multipliers. The company has developed a few interesting pokie mechanics like Megaways (a sort of 243-ways-to-win but having over 1000 winning opportunities) and Xtreme Pays. Some of the most popular pokies are 24 (based on the same-name American TV series), Rambo (also a film-based pokie with four progressive jackpots), Ultimate Super Reels, a classic game with a myriad of bonuses, and others. iSoftBet also offers a few retro games based on a 3×3 reel layout.

MrSlotty is a somewhat underestimated provider, which is not very popular in Australia. However, its games can compete with industry giants like NetEnt or Playtech. Internet geeks would want to play Emoji Slot, No More Fruits and Panda Meme – the pokies that are inspired by the ecosystem of social media platforms with their funniest memes and rage faces. The provider boasts of comic-style graphics applied in most creations. Ever game basically has two or three bonus features.

Habanero is another award-winning provider of online casino games with around 100 games released so far, most of which are available in Freaky Aces. They gravitate toward classic solutions with regard to theme selection. As an example, Bird Of Thunder is a tribal animal themed pokie with a wild, scatter, free spins and a symbol replacement feature; Egyptian Dreams Deluxe with two progressives, respins, free spins and Unlock feature; and other games with mostly conventional themes. They sometimes implement unordinary solutions such as a funnel-shaped reel layout in Jump! or a 4×4 field in Magic Oak.

One more vendor that AU users should take a closer look at is Booming Games, a prominent provider of proprietary content to online casinos. They came up with some interesting and unusual pokie features such as Mix’N’Match, Corner Pay, Reel Enhancement and Level Multiplier. In some pokies, Booming have leapfrogged over a traditional 5×3 layout and put in place a 4×4 and an exotic 7×3 grid. The max number of paylines found in their pokies is 50. Bet sizes tend to focus on low rollers.

With over 140 games in the portfolio, Red Tiger makes an impression of a serious provider with many profitable and breathtaking pokies. They are most famous for having developed a Daily Drop Jackpots network that consists of 10+ pokies with progressive jackpots that are guaranteed to win every single day/hour. Some sought-after pokies from that provider are Money Tower, Easter Money, Golden Leprechaun Megaways and Ten Elements.

Australian players who prefer simplicity over complex bonus features should try BetConstruct games such as Polar Fox, Champagne Deluxe and Dark Ninja. These and other games are fairly simple with just a basic pack of features such as wilds, scatters and free spins. They seem to be an ideal choice for those novices who need some practice and are going to build up their betting strategies. Nearly all BetConstruct pokies have a Gamble feature with a chance to double up winnings.

Players of Australia may claim the following bonuses (effective as of writing):

The online casino features a system of comp points, VIP club and regular tournaments that are organized on an ongoing, regular basis.

The reviewed online casino offers hundreds of games by 7 providers and captivating live tables supplied by BetGames.tv. Payment options are versatile enough though bitcoins are not accepted as of this drafting. No issues/scams related to payouts have been recorded so far by multiple casino customers. Mobile gaming is supported