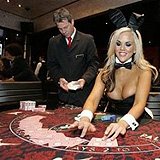 Based on its name, this betting system will be as easy as it could be. It’s also could be named as one of the oldest betting systems. The Martingale is based on principle that players have to double their bets in case of losing, which makes it negative system with progression. Basically this is commonly the first betting strategy which new players are trying to use. And it works for them.

To simplify the explanation (it’s couldn’t be more simply) – we’ll use an example.

So, you are starting with 1 unit (which is equal to minimum required bet, usually $1, $2 or $5 based on table limits). When your first hand is lost, you just double your bet and the second hand will be played with 2 units. You lost this hand too (it happens pretty often) and double your bet again. The next bet will be 4 units, and you lost it again. With fourth bet you were luckier and won 8 units.

Just simply calculations: you won 8 units and lost 7 (1 + 2 + 4). So the net profit will be 1 unit. After making this profit just start from the beginning again. There is nothing difficult at all.